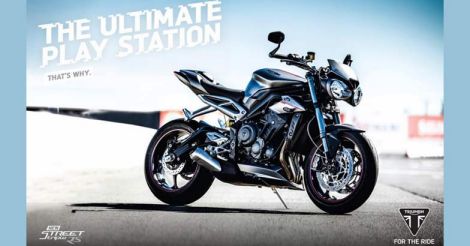 The latest version of the bike is the most explosive and adrenalin charged Street Triple ever and comes with 765cc engine which churns out 123 PS of peak power. | Photo: Facebook

The company, which entered India in 2013 with ten models, now has 17 models across five categories in its portfolio in the country.

The latest version of the bike is the most explosive and adrenalin charged Street Triple ever, he added.

The bike comes with 765cc engine which churns out 123 PS of peak power.

The company has so far sold around 4,500 units in India.

"We are the fastest growing premium space right now in the country. India is our focus market and we will be continue to bring new models into the country," Sumbly said.

The company also plans to expand sales network in the country.

It will open three more dealerships at Goa, Mangalore, and Gurgaon this quarter to take the total tally to 17 dealerships.

Commenting on the sales performance, Sumbly said the company posted retail sales growth of 27 percent in the July-September quarter.

"The premium segment (500cc and above) during the same period registered a de-growth of 23 percent," he added.

The company also launched a showroom on wheels that will travel across tier-2 towns in north India.

Triumph also looks to increase local assembly of models at its plant in Manesar, Sumbly said.