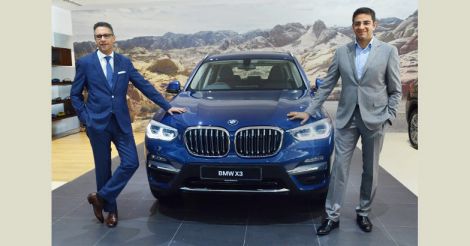 President of BMW Group India Vikram Pawah and dealer principal, Gaurav Bhatia at the launch of the all-new BMW X3 series in Gurugram on Thursday. PTI

The new BMW X3 is available in two diesel variants with the Expedition variant priced at Rs 49.99 lakh and Luxury Line tagged at Rs 56.7 lakh, BMW India said in a statement.

Commenting on the launch, BMW Group India president Vikram Pawah said the all-new X3 is practical both on and off road and is fully equipped for the most diverse driving demands.

The vehicle is powered by a two-litre four-cylinder diesel engine and is capable of accelerating from 0-100 km/ hr in 8 seconds. It is mated to an eight-speed automatic transmission, the statement added.

The model is assembled at the company's Chennai plant.

"The petrol variant will be launched later in 2018," BMW India said.