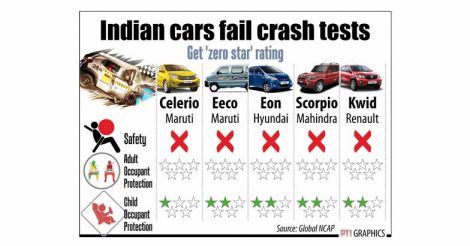 The companies, however, contested the test results.

"The latest Indian crash test results from Global NCAP released today in Delhi continue to disappoint with all five models rated as zero star," Global NCAP said in a statement.

Commenting on the latest crash test results, Global NCAP Secretary General David Ward said the results show how important it is for cars to have a body shell that can remain stable in a crash.

"This is an absolutely crucial pre-requisite for occupant safety together with fitment at least of front air bags," he added.

Auto industry body SIAM, however, questioned the findings saying the Global NCAP crash tests were conducted at a speed of 64kmph while even in Europe and U.S, which has the most advanced safety standards frontal offset is tested at 56 kmph and India is also adopting the same standards from 2017.

"Globally safety standards are set by national governments and companies comply with those regulations. India will also be adopting crash test standards from 2017 conducted at speed of 56 kmph. Currently, vehicles sold in India comply with the regulations set by the government," Society of Indian Automobile Manufacturers SIAM Director General Vishnu Mathur said.

Global NCAP is not a standard setting body. It is a private NGO testing vehicles on its own benchmark. It is a commercial venture to give star ratings to companies which approach them to get rated for marketing purposes, he added.

Mathur said Global NCAP has not explained the rationale behind testing cars at 64kmph and the actual average speed in India is much less than that.

Reacting to the findings, Maruti Suzuki insisted that all its products were safe and met the safety standards of India.

"The tests by Global NCAP are conducted at speeds that are higher than those prescribed by the regulatory authorities not only in India but in Europe and USA. The results of Global NCAP have to be seen in that perspective," the company said.

Renault's fast selling small car Kwid was tested in three versions, including one with airbags, but each was rated as zero star for adult safety, Global NCAP said, adding as a result of the crash testing, the company has sought to improve the safety performance of the Kwid.

"It is very surprising that a manufacturer like Renault introduced the Kwid initially lacking this essential feature. Global NCAP strongly believes that no manufacturer anywhere in the world should be developing new models that are so clearly sub-standard," Ward said.

Car makers must ensure that their new models pass the UN's minimum crash test regulations, and support the use of airbag, he added.

"The collapse of the structure combined with the lack of airbags explains the score for the adult occupants protection which means that there is high probability of life threatening injuries for at least one of the adult passengers," it said.

Mahindra & Mahindra on its part said that its entire automotive products are developed and manufactured to meet or exceed the safety standards set in India.

"In fact, many models exceed the expected regulations of 2019. The star rating as released by Global NCAP (GNCAP) in the latest crash test was conducted on non-airbags variant of the Scorpio. Typically, in any star rating process, non-airbag variants do not perform well on safety standards," it said.

"The unstable structure in the passenger compartment and the lack of airbags explained the poor result in adult occupant protection," it added.

Ward said the results highlight the importance of the Indian government's decision to mandate the front and side impact crash tests from October 2017.

"Legislative action is needed to ensure that the minimum levels of occupant protection recommended by the UN are guaranteed for Indian consumers. But manufacturers don't have to wait for legislation and we urge them to act to eliminate all zero star cars from production as soon as possible," he added.