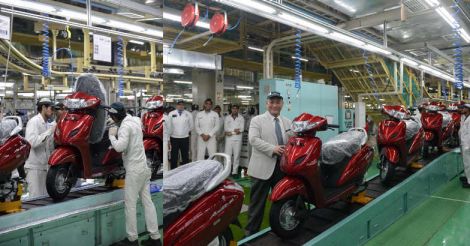 Keita Muramatsu, (C), president and CEO of Honda Motorcycle and Scooter India (HMSI), poses with employees at the second assembly line of Honda's fourth plant in India at Vithalapur, some 80 kms from Ahmedabad on June 29, 2016. AFP

The plant, located in Ahmedabad district's Mandal taluk, has seen investments of Rs 1,100 crore from the Japanese company and a similar amount from 22 vendors.

The plant will be producing three variants of the company's best-selling Activa models and Dio scooters only, as it hopes to reach maximum output by September.

With additional capacity, HMSI is likely to cut the nearly three-week waiting period for these models by the peak Diwali season, its senior vice president for sales and marketing, Y S Guleria, said.

The company's total production capacity will go up to 5.8 million units a year, making India the largest unit among Honda group.

HMSI president and chief executive Keita Muranatsu said there is 'scooterization' happening in the market today, which has witnessed sales of the scooters growing at double the pace of the overall 2-wheeler segment.

HMSI enjoys 58 per cent market share in scooters. This year, it is targeting to clear the 25,000 units backlog a month. 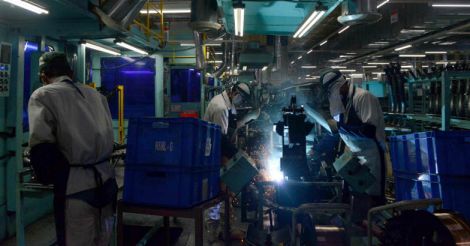 Employees weld metal parts to be used in the production of Honda Activa scooters at the second assembly line of Honda's fourth plant in India at Vithalapur, some 80 kms from Ahmedabad on June 29, 2016. AFP

The second line will add 1,100 units a day or one scooter every 22 seconds, to take the total production at the plant to 4,400 units day, Guleria said, adding the plant employs over 4,050 people, who work in two shifts.

Out of the 4,400 units a day, 3,200 will be Activas and the rest will be Dios, he said. This is the fourth plant by HMSI since it began operations in India in 2001 and its total investments in the country has crossed Rs 8,000 crore.