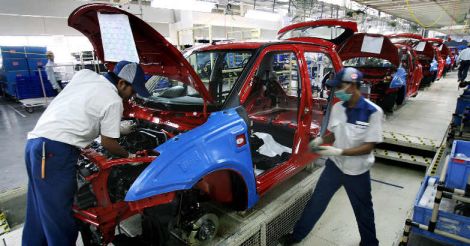 Workers fit out Maruti-Suzuki Swift cars on an assembly line at the new autoplant at Manesar. File photo: AFP

New Delhi: The country's largest carmaker Maruti Suzuki India on Thursday hiked prices of its vehicles across models by up to Rs 34,494 in order to offset the impact of infrastructure cess proposed in the Union Budget 2016-17.

"Following the infrastructure cess on automobiles in the Union Budget 2016-17... prices of its models would go up in the range of Rs 1,441 to Rs 34,494 across its models," Maruti Suzuki India (MSI) said in a statement.

Ciaz SHVS and Ertiga SHVS are exempt from the infrastructure cess and so, there is no change in the prices of these models, it added.

On Wednesday, German luxury carmaker Mercedes-Benz announced its plan to raise prices of its entire product portfolio by up to Rs 5 lakh from March 15.

Already, Tata Motors hiked the prices of its passenger vehicles in the range of Rs 2,000 and Rs 35,000 while Hyundai Motor India and Honda Cars India have also stated their intention to hike prices in the range of Rs 3,000 to Rs 80,000 on their respective product portfolios.

These are over and above a cess of 1 per cent on petrol/ LPG/CNG driven vehicles of length not exceeding 4 meter and engine capacity not exceeding 1,200 cc.

Finance Minister Arun Jaitley also proposed "to collect tax at source at the rate of 1 per cent on purchase of luxury cars exceeding value of Rs 10 lakh.

India in March said all foreign billings for digital services provided in the country would be taxed at...