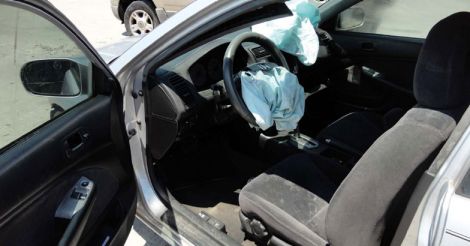 New Delhi: The government has no proposal to make airbags mandatory in all cars at present but rules have been amended to enhance safety of occupants in frontal collisions for all new models from October 2017, the Parliament was informed on Tuesday.

The Ministry of Road Transport and Highways (MoRTH) has informed that "at present government does not have any proposal to mandate provision of airbags in every passenger car," Heavy Industries and Public Enterprises Minister Anant Geete said in a written reply to Lok Sabha.

For protection of pedestrians and other vulnerable road users in the event of a collision, the government has also laid down safety standards that new models from October 1, 2018 will have to meet and all models by October 1, 2020.

Industry experts said in other parts of the world too government does not mandate a technology and it is up to the automobile companies to come up with measures to meet the safety norms. However, under the current available technology it is not possible to meet the frontal crash test norms without airbags.

Geete further said: "Some other measures have already been taken up step by step to ensure the safety of occupants of cars. The seat belt regulation and the seat belt anchorage regulation has already been made mandatory with effect from April 2005."

This requires mandatory fitment and wearing of seat belts in both front and rear seats of cars, he said adding "child restraint system has also been mandated with effect from October 2015".

The minister also said Society of Indian Automobile Manufacturers (SIAM) has informed that there are more than 60 mandatory safety tests prescribed for vehicles, which involve all safety parameters in passenger cars.

In reply to a separate query, Minister of State, Heavy Industries and Public Enterprises G.M. Siddeshwara said India is taking steps towards harmonisation of national regulations of safety standards for passenger cars with UN-ECE regulations.

The MoRTH has formed a dedicated panel for introducing safety features in new vehicles under 'Bharat New Vehicles Safety Assessment Programme', which will be voluntary from October 2017, and mandatory by October 2020, he added.