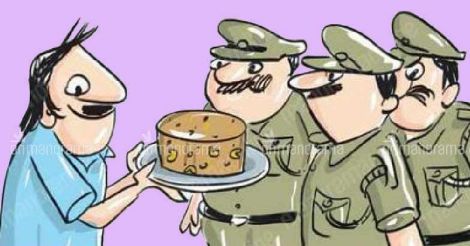 Cops at the Rajakkad police station hardly recognised the visitor with the cake, until they were told that they had intercepted him for drunken driving four months ago. The man wanted to thank the policemen for helping him kick his alcoholism.

Rajakkad sub inspector Joy Abraham and colleagues waylaid Kannappan from Kumbappara near Rajakumari because the cardamom planter was driving under the influence of alcohol. Of course, Kannappan had been boozing for 23 years and driving too. However, the first tryst with the police prompted him to sit up and take note.

He decided to call it quits. He told the policemen that he had not touched booze in the last four months and thanked them for it.

He was made to pay a fine for drunken driving but he said that the money was nothing compared to his monthly savings on booze. He said that he could save up to Rs 10,000 a month just by abstaining from alcohol.

The policemen had a sweet surprise anyway.