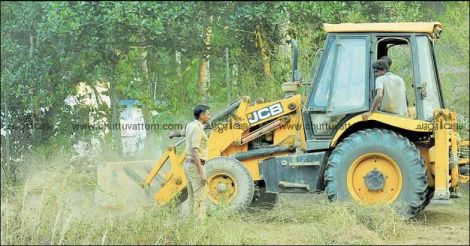 The police cleaned the panchayat stadium at Thazhathu Kulakkada which had been lying disused for some time and was overgrown with vegetation with an earthmover.

Puthoor (Kollam): What would the police do if people complain against some youngsters playing football on a temple ground? Arrange another venue to play! That is exactly what the Puthoor police did recently.

The police cleaned the panchayat stadium at Thazhathu Kulakkada which had been lying disused for some time and was overgrown with vegetation with an earthmover.

The incidents began when complaints were filed with the Janamaithri police that pedestrians passing through the temple ground at Thazhathu Kulakkada were being regularly hit by the ball. Following this, the police asked the players to look for another ground. The youngsters told the police that they were willing to play at the panchayat stadium, but the conditions were unsuitable not only due to the wild growth of plants but also because it had become a den of anti-social elements. The police promised the youths a solution for both issues.

The law-enforcers, under the leadership of Sub-Inspector V Jayakumar and Police Association councillor civil police officer Vinod Kumar, started clearing the stadium of the plants. During the cleaning, numerous empty liquor bottles were found in the area. Police said patrolling would be intensified during night hours to prevent anti-social elements from making a comeback to the stadium premises.

Some hiccups were experienced during the cleaning when the panchayat raised objections stating that it had not been informed about the drive. The cleaning was subsequently halted temporarily.

Panchayat president G Saraswathy later said that the cleaning would be completed soon and the stadium opened for sports and games. Welcoming the initiative she said, “The disused stadium benefited nobody. The panchayat will make a plan for the maintenance of the stadium and implement it diligently.”