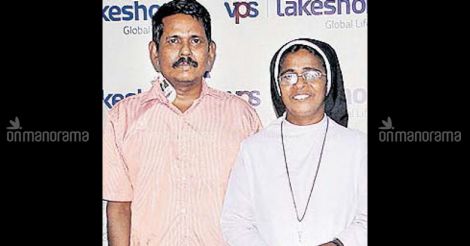 Marad (Kochi): Spreading the gospel of charity beyond caste and religion, Sister Rose Anto has celebrated the silver jubilee of her nunhood by giving a new lease of life to a renal failure patient.

Thilakan, 47, son of Velayudhan from Azad Road in Irinjalakuda, has started life anew after receiving kidney from Sister Rose Anto.

Thilakan, who is married with two kids, used to survive on his meager income that he derives from repairing cycles. He was detected with chronic renal ailments, which had led to the failure of both his kidneys.

Sister Rose Anto came to know about the case when a committee formed by residents approached her seeking donation for his surgery. She readily agreed to donate her kidney.

She had the full support and guidance of the Kidney Federation of India led by Fr. Davis Chirammal. Sister Rose Anto, daughter of the late Antony and Thresyamma of Alappuzha, is the Hindi department head at Irinjalakuda St Joseph’s College.

She is also a known name in social and charitable activities in Irinjalakuda, offering support and sustenance to the elderly, poor widows and social forestry.

The transplant surgery was conducted by a medical team led by Dr George P Abraham at VPS Lakeshore hospital in Kochi.