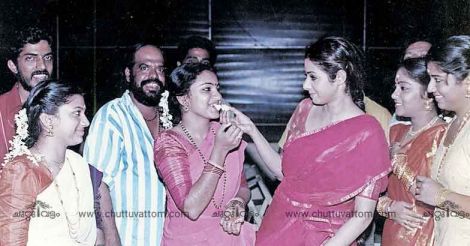 Thrissur: Sabina Jose had tasted the cake a couple of decades ago, but she still remembers its flavor and believes it would remain for ever. It was lent by Sabina's birthday cake cut by actress Sridevi, on the sets of the film Devaraagam directed by Bharathan.

Sabina, who now lives in Thrissur, recalls the friendship that she had struck with Sridevi from the days of Devaraagam.

Sabina, who has acted in 13 movies and 12 tele-serials, was invited to act in the movie Devaraagam when she was a Class IX student. The lengthy role she got with Sridevi helped her make friends with the star.

One day, while the shoot of the film was progressing in Chennai, the film crew decided to celebrate Sabina's birthday. Sridevi, who wasn't around, arrived at the location after she heard about it from KPAC Lalitha. She cut the cake and shared the sweet with Sabina.

Sabina never got a chance to do a film with Sridevi again, but the superstar kept in touch with her over the phone.

Sabina has done minor roles in movies like Chakoram, Chenkol, Kulam, Narasimham etc. She had also won the best child artiste award for her performance in a Tamil tele-serial.