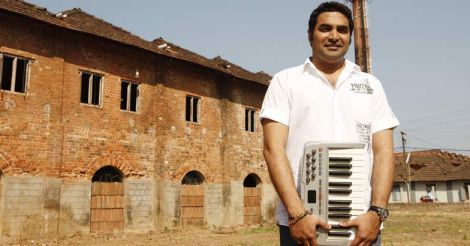 Gopi Sundar embarks on a futuristic voyage to set up a music production house.

'Mr Fraud’, ‘How Old Are You’, ‘God’s Own Country’ and ‘Bangalore Days’ – What is common to these recent Malayalam flicks?

Gopi Sundar, however, is not a contented soul, ready to rest on these laurels. Perhaps, while looking back after two or three decades, Sundar doesn't want to be graded by posterity for the vibrant music he weaved alone. So how on earth does the most sought after composer in present-day Malayalam cinema want posterity to rate him, you might wonder.

"In Malayalam film music, we have had the golden era of Devarajan master, Raveendran master and so on. But we have not heard of them bringing up talented musicians to carry forward their legacy. When I'm aged, I would love to hear that Gopi Sundar has helped others grow,” he unveils the trajectory that he has charted for himself to Manorama Online.

And mind you, this ain't a mere concept. He has started giving wings to his dreams. The recently launched Gopi Sundar Music Company, he says, will act as the stepping stone for aspiring musicians.

The plan is to form a group of composers, who will work on his projects, under this umbrella. "A music production house - that's my idea," he reveals, outlining the broad contours of what he calls is a “futuristic plan”.

"I don't think any other musician, even in other industries, is doing this. We always tend to keep the maximum to ourselves, right? But in near future, it will be a common practice in the music industry," he adds.

Make your way, make way for others, too, is his motto. Perhaps that explains best why he has started composing songs free of cost for movies through his company. Yes, you heard it right. Instead of remuneration, Gopi gets the ownership rights of the songs. The recently released ‘Last Supper’ was one such movie for which he set the tunes free.

“I have worked with superstars for big banners. So, new and small-time filmmakers feel that I might not be affordable and approachable. But no, anybody can come to me. If I like the movie's script, I will do the music without taking a penny, but I will keep the rights,” Gopi explains.

“Even if it’s a small-budget film, they will have an amount kept aside for music. Using that, I will give them the background music (BGM) too,” he says.

So where does he find time to fit all these in in his hectic scheme of things? “If there’s a will, there is a way,” Sundar's confident self comes to the fore. Apart from composing, Gopi also works as a programmer for other musicians.

Amid the scorching pace of his work-loaded days, Sundar manages to check out the reaction and criticism about his songs on social networks.

So what does the composer has to say about the ‘copy cat’ cries? “I never said that I don’t copy. This so-called ‘copying’ takes place when I feel that a song can be tweaked in a different way. The interesting part is that the audience might be listening to the original song after hearing my song. If someone uses my song in such a way, I would feel proud thinking that I could inspire them,” says he.

This way, other songs of the movie too get a slice of attention and turnout to be hit numbers. In that case, it works as a business trick too.

The singer-composer is aware of the sweeping changes and new trends in film music. “The taste of audience changes and I try to give them what they want. Way back, we had only Doordarshan and Akashvani as entertainment sources. But that’s not the situation now. In music too, new trends take birth from time to time,” he says.

Gopi, who has made a slew of stars croon for his tunes including Dileep, Dulquer Salman, Nazriya Nazim, Shweta Menon, Meghna Raj and Ananya, is of the opinion that technology is a great leveller.

“Yes, technology helps and anybody can sing. But that’s not the reason here. Actors have taken the characters into their mind and body language. The right feel and emotion of a song comes naturally to them. Luckily for me, many of the Malayalam’s actors can sing well,” he says.

Who else other than actor Murali Gopy could sing ‘Kaal Kuzhanju’ from ‘Left Right Left’ better than that. Ditto is the case with Dileep’s ‘Thoma Style’ and Nazriya’s ‘Ummachi Rap’, Sundar points out.

So can we know about the role reversal? What about his acting stint in ‘Salala Mobiles’ and the recent Mohanlal-starrer ‘Mr Fraud’? With a candid laugh, he makes it clear that he has no intention to focus on his acting skills. “I was asked to do those roles as the situation arose,” he says. His friends have called him after seeing the movie, albeit not to congratulate. “They still tease me asking if I don’t have any other better job to do,” he tells Manorama Online.

So the man who likes to think ahead of the learning curve is setting the bar high. ‘Koothara’, ‘Naku Penta Naku Taka’, ‘100 Degree Celsius’ and ‘Manglish’ are his upcoming releases.

The buck doesn't stop there. He has entered into a deal with actor John Abraham’s production company to compose music for three films, marking his Bollywood foray. Another film in Telugu is also on the cards.

No wonder, his family has started complaining for not spending enough time with them. “Now that I have started flying, there is no looking back and I have to move ahead,” he winds up.