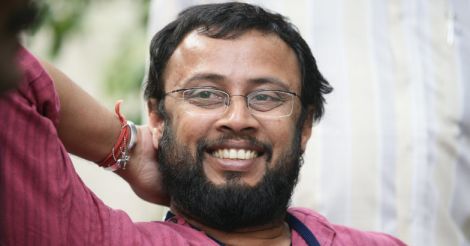 The most incomprehensible and intangible path is not in this earth. It is inside the minds of people, especially in the mind of a woman. Lal Joses' upcoming movie Nee Na tells the story of two women who are intangible. Lal Jose talks about 'Nee-Na' a movie that tells the tale of two women.

'Nee-Na' are two women, Nalini and Neena. 'Nee-Na' is the story of these 2 women. Nalini lives with her husband and has a family. She comes from Mumbai to Kochi to live with her husband Vinay Panickar who is called V.P. Neena, and he works in his company in Kochi. Neena is an artist and a smart girl. But she is a heavy drinker. Just like a male artist, she too has her share of weaknesses.

Neena's life crosses paths with those of Nalini and VP and how they try to help Neena to stop being an alocholic forms the part of the film. It is my first attempt with this kind of a theme. The movie will have a lot of emotional and heart-touching scenes. Another specialty about the movie is that Ann Augustine is acting for the first time after her marriage in a movie. Ann comes on-screen as Nalini. Former Miss Kerala Deepti Sati will be Neena. Vijay Babu will be acting as V.P.

How was shooting in Russia?

I saw Russia while on my way to London during a car journey. Ever since then, the places in Russia have been on my mind. When we went there, there was a nip in the air, there was a cold wind blowing and it was snowing all over. The temperature had hit minus 4 degrees during that time. I saw snow covered areas for the first time when we went to shoot Diamond Necklace in Manali. But then, snow was there only at a few places. In Russia, snow is everywhere. Since the value of rupee had risen, shooting in Russia was perfect for us economically than any other foreign locations. Our shooting was in St.Petersburg and Moscow. Since Moscow was the capital city, security was tight. But other than that, shooting in Russia was fun.

Lal Jose films are not women-oriented. But women have strong characters in your movies.

After Elsamma Enna Aankutty released, a lady from abroad called me over the phone. She asked me what kind of a movie I had made and said that girls do not react like what has been shown in the movie. She said all this is my imagination. Then, I asked her about herself. She said that she was educated in a convent and lived in a hostel. Later, she got married and moved abroad, and has been a home-maker since then. After hearing her story I told her that women are strong and most of them do not realize that. I told her that I know many women who are stronger than Elsamma Mostly, it is a women itself who finds it hard to accept the strength of women.

Who are the women in your life?

How are our girls being subjected to violence like this?

Violence against women has been happening for many years. But now, doors to the world are wide open in front of our youngsters, and hence they have nothing to explore by now. Youngsters have access to anything and everything through the internet and their mobile phones. Hence, nothing makes them curious now. Not even love. That is why relationships these days are all about calling and texting, and then breaking-up within no time. In old days, there was curiousness about love. It used to take months to see a smile or even a glance on your lovers face. Kissing was something you could not even think about. Now, even kisses happen on streets. Hence, emotional attachment is alien to our youngsters. They do not know the depth of relationships.

What is your idea of a woman?

She should have common sense, and humour sense too. Someone who can smile from within her heart is my idea of a woman.

How would you describe the idea of a bold woman?