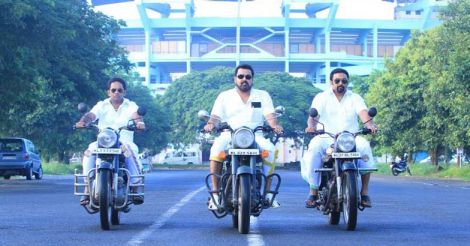 "I'm a huge fan of Cho sir. We still love 'Muhammad Bin Tughluq', which I think was at least 20 years ahead of its time when it was made. Some of the jokes in that film are so relevant today. I'm not saying my film is ahead of its time, but it has the kind of humour used in '...Tughlaq'," Vaidyanath told reporters.

He points out that what he has written is an original concept.

"I love actors like Billy Crystal, Robin Williams and Steve Carell. They're all heroes who make us laugh too. Lal sir is an amazing humourist. He's got great comic timing. I feel I've got the opportunity to present the comical side in him," he said.

The movie was not written with Mohanlal in mind.

"I believe the script found the actor. I never wrote the film keeping Lal sir in mind. But when I eventually wrote it, I felt he would fit the bill. It might sound philosophical, but when I asked him what made him sign this project, he said the film was destined to happen.

"When I narrated the script, he agreed to do the film right away. I was quite surprised, and wondered what he would have really liked. But I assume he must have been impressed with the story and my passion to make it with him," Vaidyanath added.

Talking about the movie, he said: "This is a dialogue-driven political satire. Most of the funny lines will make audiences laugh at themselves. It will make us laugh at our own democracy, but in a healthy way"

Any kind of humour that "works at the box-office" should be welcomed, feels Vaidyanathan.

"I think all kind of humour should be accepted. I personally liked the humour in the recent Tamil film 'Jigarthanda'. Nobody can judge what kind of humour will work at the box office, but whatever works should be appreciated," he added.

"Peruchazhi was predominantly shot in the US, where the filmmaker's first film "Achchamundu Achchamundu" was also shot.

He says his stories are more suitable against the US backdrop.

"I chose to shoot in the US because the story happens there. In my first film, which was about pedophiles, I'd read more stories about them in the US. So I shot my film there because I felt more comfortable with that," he said.

"In 'Peruchazhi', I'm comparing two of the world's biggest democracies—India and US. This story can only be shot in the US, not Dubai or Singapore. But now I realize that's my strength. Why should I not choose to make films in America when I can include foreign characters too in my story," he asked.