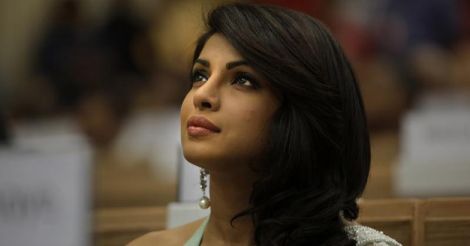 Mumbai: Don't let her looks, fame and celebrity fool you- Priyanka Chopra, a leading lady on a mission with the box office turner 'Mary Kom' knows exactly how to accomplish her missions in full swing. Hit sensation and Bollywood Super-Star Priyanka Chopra has experienced a meteoric rise to the top since her acting debut in 2002.

“I can get things done,” she says. Indeed, the latest evidence that the 32-year-old superstar is telling the truth is her portrayal of Mary Kom, the Olympic medallist and five-time World Amateur Boxing champion who comes from the far-flung state of Manipur in India’s northeast, an area that is far away from the heart of the country and home to many of its ethnic minorities.

The decision to cast Chopra in the role of Kom has led to accusations that the film’s producers preferred to go with a bankable star rather than another actor from Manipur or elsewhere in the northeast, and has prompted a new round of discussion about the nation’s marginalizing of people from this region. Chopra discussed this and other aspects of playing Kom in an interview.

Q. How do you portray a real, living person? Are you left with any creative licence?

A. Of course you can’t imitate or mimic someone. I spent a lot of time with her. I got to know her, and the character that I play is my projection of what I have understood as Mary Kom. I don’t know how right or wrong it is, but according to me it’s the closest I could be to what her personality is. 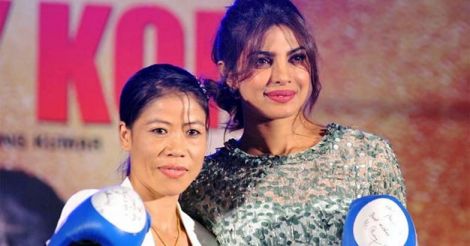 Q. Wasn’t this movie challenging? On a physical level as well as others?

A. It was very, very challenging at many levels, you are right. But I like things that push me. It’s a film that I know, if I go wrong, then it would be really hard on me because I have put two years of my life into this. But fingers crossed, all that I had has gone into this movie as a creative person.

For Mary it was very important that Manipur and Manipuri culture is something that gets recognized, and we have tried to encapsulate as much of it as possible. Manipur is very important, it’s almost like a second character in the film but because we are a Hindi film we have of course 'Hindied' it down a lot more, but we have kept a lot of Manipur in terms of its culture.

Q. You visited Mary Kom at her home in Manipur. What did you think about the northeast – the general perception is it is cut off, people feel alienated there, it is neglected, etc.

A. People are very angry in Manipur with India as such. I hope this film helps them feel a part of the country that they are. We are rightfully theirs. I have been to a lot of northeast, a lot of my family is in the army so we keep getting posted there. There is a lot of anger, there is a feeling of being alienated, of not being a part of India. 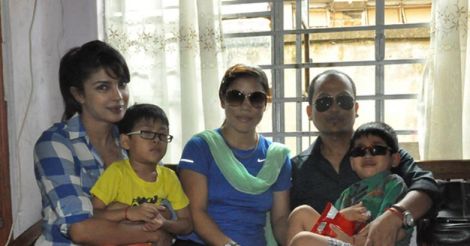 Priyanka Chopra with Mary Kom and her family

I hope with, first of all, me as a north Indian person doing this film and representing Manipur, and second of all, the fact that this film is being made for a pan-India Hindi audience, so the northeast I hope gets a lot more attention and light because it has provided so many champions for India and we don’t know about them.

Q. What do you make of the entire controversy about not having an actor from the northeast play Mary Kom?

A. That was really not up to me. I think there was a whole debate on casting a new person, an actor from the northeast. But the budget of the film became really small because unfortunately, among the top few actors, there is nobody who is northeastern.

I was told that we needed a commercially viable actor to play it, and I was really happy that I was picked. Hopefully with this film, since we have cast so many people from the northeast, not just the northeast even from Nepal, I hope that just because someone physically looks different from you, people get to an understanding and acceptance of the fact that India has so many various cultures and people.

Even when a south Indian actor comes into Hindi films we say south Indian heroes 'kabhi nahi chalenge'(“will never work”). There are those stereotypes. The same thing is with the northeast – because of the stereotypes there is never been any success because they look different. I hope that with this film and the amount of actors we have cast in this movie that stereotype changes.

Q. How did you land this movie?

A. I knew Omung (director) and Sanjay sir (producer) and I decided it would be challenging for me on so many levels. For me it was a message – I want people to know Mary. When this film was starting to be made, if you asked people who Mary Kom was, they had no idea who this girl was despite her having won the Olympic medal.

And now that there has been so much talk about the film over two years there is so much recognition that has come to her. And I hope with the medium of cinema, which has such a large reach, we can give Mary the status that she deserves.

Q. Is Bollywood finally seeing women actors as more than arm candy or are movies like 'Mary Kom' and 'Mardaani' just a flash in the pan?

A. In commercial films, actresses in the last few years have really come out in big parts. I think it’s the way society is also seeing women that is changing in cinema because they are a reflection of each other.

As much as this is a difficult time for women in India, it is also the kind of time to revolutionise and stand up and say no, we are not taking this sitting down. So it’s definitely not a flash in the pan.