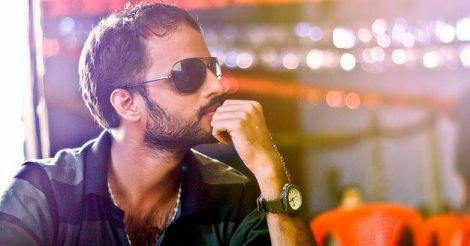 A super hit movie on debut. That can only happen if you are a great talent and fortunate. Jude Anthany may not be a household name in Kerala, but his directorial debut, 'Om Shanti Oshana', definitely is. Success, however, has not changed the young director's way of life. For the young man who quit a lucrative IT job and career to pursue his celluloid dream, the bus journeys and restaurant visits, which have been a routine, are still on.

In a candid chat with Manorama Online's for its 'I Me Myself' programme, the filmmaker tosses his heart wide open.

I was, in fact, obsessed with becoming an actor first. Then I discovered it's not so easy. Going about and meeting directors to seek chances was even harder. Then it hit upon me, why not become a director myself, so that I can play the role of my choice. Thus my ambition to become a director took shape. The dream and I cherished in school and pursued in college became so irresistible and intense that I finally quit as a software engineer.

You were working then?

With Infosys. It was at a time when I had got a chance to work as an assistant in the film 'Crazy Gopalan'. But taking long leaves was in fact near impossible. So I took medical leave on the pretext that I had jaundice. But when the film released, my manager, also a Keralite, saw my name in the title credits. Somehow, I managed to slip away.

My obsession with films had its effect on my performance professionally. So, naturally when it came to assessment and evaluation, a showdown was in the offing. Although, I expected a sudden exit, Infosys had a tradition of not sacking any of its staff members all of a sudden. I was asked to continue for another six months. However, a week later I was asked to put in my papers with immediate effect and they offered me three months' salary. To me, that was my first glimpse of God's grace. It reminded me of the maxim 'fate takes you where you ought to be'.

My initial dealings with Vineeth were purely formal and business-like. We discussed only film-related matters. But in course of time we became close buddies and enjoyed a very cordial friendship. Vineeth has always been a jem of a person. 'Malarvadi' was a lot of fun and energy and it taught me a lot and padded me with a lot of confidence. So was 'Thattathin Marayath'.

We two are of the same wave length, I presume. We think alike, hit upon same ideas and you won't believe, we sometimes simultaneously utter the same words while starting a conversation. He is a phenomenon among the new crop of actors. The wide range of acting skills makes him stand apart. This contrasting character is evident in real life as well. He may look very tough outside but in reality he is an incredibly simple and soft person. Once, a kid went to him asking for his autograph and Nivin gave him a stern look that the kid ran away. Minutes later, what we found was equally surprising – he was playing with the same child, laughing heartily.

Nothing had gone the way we had planned for Om Shanti Oshana. How it became a hit is still a wonder to me. The movie underwent a series of changes and deviated far from the original structure in the course of its making. As the shooting progressed we encountered a lot of challenges. And now it seems things came out so well because we digressed from the original plan and resorted to lifting directly from real life situations.

On being a debutant director

At the outset I was the most mellowed director in the world, making no big demands or passing orders. No ill-will or malice. But soon I discovered things were getting out my hands due to my soft attitude and that it was high time I pulled up my socks and got into business. I don't know when after that I turned a ruffian shouting at any erring member of the unit. There were a lot of such instances. I had to really suffer for being a first-time director. Problems persisted even during post production. Thank God, we survived all the odds.

On directors donning the role of actors

I am at a loss for words regarding the amazing display of astuteness by those senior directors. I was afraid while roping in Renji Panicker, the renowned director, who had created so many mega flicks, for the role of Dr Mathew Devasya. But he was a really different person on the sets ever ready to whet his character to perfection.

A breathtaking aspect about director Lal Jose was that he simply transformed into an actor before the camera. With so many diverse and successful flicks under his belt, he could have easily intervened at any of the stages to give a tip or to offer a suggestion. On the contrary, he kept simply focusing on his acting. It really exhibited the greatness of the directors.

With Vineeth Sreenivasan, I had already established a profound rapport by then. When I approached him for the role of Dr Prasad Varkey, he had sternly replied in the negative. It was after long bouts of persuasion that he finally yielded to my request.

About the film on Mammootty

We had made a short film on veteran actor Mammooty titled 'Mammukka's Biography'. Our intention was to stretch the short into a full-length movie on the ace actor. During the research for that short film, I learned why and how Mammukka grew to become one of the great actors that he is.

In the present context, in my opinon, if anyone deserves to don the character of Mammotty it is always Nivin Pauly, who is a hard core fan of the superstar. We had approached Mammootty with a copy of the short film and had explained to him about our idea. He has already agreed to the project with a caveat: “It's very easy to act like me, but may not be so to act as me.” Anyways, we'll soon begin the project when things fall in place.

(The video featuring Jude Anthany's interview will be available soon on the YouTube channel of Manorama Online's 'I Me Myself' programme.For more videos, click below)