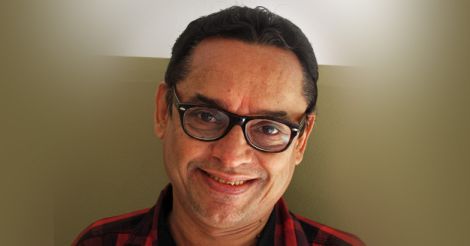 There are two things that the people of Vayalar hold close to their hearts, though not for the same reasons. The political history of Kerala with marks of pre-independence oppression is still fresh in the minds of people. And the memory of eponymous master lyricist - Vayalar Rama Varma, who had penned hundreds of everlasting Malayalam film songs. We are not going into the political struggles. Onmanorama had a chance to talk to the great man's son, Vayalar Sarathchandra Varma who is preserving the legacy.

On a pleasant summer morning Sarathchandra Varma received us at his residence with a gleeful smile and candidly shared with us his experiences, observations, whims, fancies and took us around the causeways, yards and remnants of the ancestral home where Rama Varma was born and had created the lyrical gems. Take the trip with us.

Of course there is an influence of my father. But the truth is I can reach nowhere near him in terms of class. I cantered to song writing after I took VRS from a private distillery near Cherthallai, where I had served for 22 years. Earlier, film songs took birth after lot of discussions. The film director, music director and the lyricist used to sit down together and finalise a song. Now, they send the tune by e-mail and I mail it back after the lyrics are done. The correspondence may extend for a couple of corrections or changes and there, the song will be ready.

The present approach of musicians towards songs

There are so many fresh talents now. Nevertheless there is mindless approach to lyrics and songs too. Intervention is far too high now. Some people make random suggestions with no heart or sense at all, just to show off their expertise, which they don't have. This is an age wherein even a film director's driver make comments on artistic creation and influence director's opinions.

Once I was resting after sending a lyrical piece back to Music director. He soon called me up and asked me to remove all the words having 'ha' syllable in them since a renowned north Indian singer was supposed to render the song and that he was not comfortable with spelling those Malayalam words. I responded promptly, giving due respect to the request. But the musician was on the line yet again asking me to change all words with another syllable. My only option was ask him to send me back a list of all the syllables that the singer could pronounce in Malayalam. That's is the state of affairs now.

I don't bother much about the creator. I am awed by creations. As a person the writer might disappoint us. I sometimes I find a couple of lines pregnant with deep meaning more exciting than a voluminous piece of literature.

The favourite hour of creativity

I do my writing in the early morning, as early as 2.00 am. It is the hour when there is no sounds other than that of birds chirping. Besides it is the time when phone takes rest. The mind is fresh then and ideas and words flow freely.

Writing to the tune or tune to the writing

Writing lyrics first gives you a lot more freedom and literary aesthetics. But that rarely happens these days as tunes are made first. But of late I wrote a song lyrics which was tuned after writing it for the upcoming film Krishikkaran starring Nedumudi Venu. It has come out well and gave me immense satisfaction.

On current trends in film songs

Once a veteran singer was approached by a so-called new age music director with a song. After going through the notations the singer asked the director, "Is the person who tuned the song an instrumentalist?"

The music director asked wide-eyed in surprise, "Yes, how did you know?" The singer retorted, "Where is the space to take breath in this?."

Most of today's songs are overwhelmingly replete with instrumental pieces and electronic sounds. Making songs basely colloquial and awkwardly meaningless is the trend now. Of course there are good songs too. But they come fairly less in number.

The conversation rolled on as he kept waving hands at familiar faces passing along the road. The warmth and the serenity of the place that was identical with the present incarnation of lyrical genius was intoxicating and infectious. We really had to struggle to free ourselves from the bond of the place that is still rich with the lushness and bounties of nature.