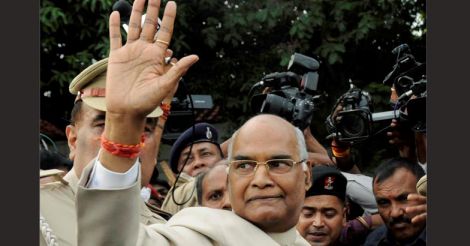 Lucknow: Though Uttar Pradesh has given the nation a number of prime ministers, it will be perhaps for the first time that the politically-crucial state will have the pride of sending someone to Rashtrapati Bhavan if NDA nominee Ram Nath Kovind becomes president.

The closest the state came to having its representative in the President's House was in 1969, when Mohammad Hidaytullah became the first acting president of India from July 20, 1969 to August 24, 1969.

As he resigned in a few months to take part in the presidential elections, Hidayatullah, who had served as the chief justice of India, took over as the acting president until the election of V V Giri as the president of India.

Hidaytullah was born on December 17, 1905 in Lucknow in a well-known family of Khan Bahadur Hafiz Mohammed Wilayatullah, an upper-class family. His grandfather Munshi Kudartullah was an advocate in Varanasi.

The two-term Rajya Sabha member will be the second Dalit president as his election is almost a certainty with the ruling bloc enjoying majority in the electoral college. K R Narayanan was the country's first Dalit president.

Kovind, who was born on October 1, 1945 at Kanpur-Dehat in Uttar Pradesh, studied commerce and law in Kanpur University.

He also served as a member on the board of management of the B R Ambedkar University, Lucknow.

Uttar Pradesh has the credit of giving nine prime ministers, including incumbent Narendra Modi, who is a Lok Sabha member from Varanasi.