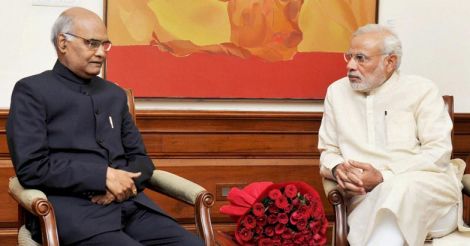 New Delhi: A day after he was named as the NDA's presidential candidate, bihar governor Ram Nath Kovind on Tuesday resigned from the gubernatorial post.

President Pranab Mukherjee has accepted the resignation of Kovind as the governor of Bihar, a communique issued by the Rashtrapati Bhavan said Tuesday.

West Bengal governor Keshari Nath Tripathi will discharge the functions of the governor of Bihar, in addition to his own duties, it said.

The BJP Monday announced the name of 71-year-old Kovind, a low-profile dalit leader and a two-term BJP Rajya Sabha member, as its nominee for the president's post.