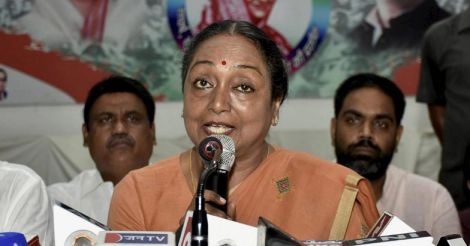 Ranchi: Opposition presidential candidate Meira Kumar said on Saturday that his opponent, NDA nominee Ramnath Kovind, is a good person but hers is a fight of ideology.

"Ramnath Kovind is a good person but my fight is not against him, rather it is a fight of ideology," Kumar told mediapersons here.

The former Lok Sabha speaker interacted with all the major opposition leaders and sought their support for the July 17 election.

Jharkhand Vikas Morcha- Prajatantrik president Babulal Marandi was, however, not present in the meeting.

Kumar said she requested members of the Electoral College "to vote on their voice of conscience as the elections for the post of president is not on party line."

Later, she met JMM president Shibu Soren and his son Hemant Soren in their respective residences. Congress MLAs and MPs were also present in the meeting.