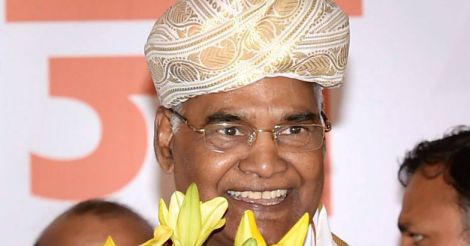 Ram Nath Kovind is greeted with a bouquet on being elected as the 14th President of India, in New Delhi on Thursday. PTI Photo

Washington: The United States has congratulated president-elect Ram Nath Kovind on his electoral victory and said that it looks forward to working with him on regional and global issues.

Kovind, a low-key lawyer-turned-politician, was Thursday elected as India's 14th president, the first BJP member and the second dalit to occupy the country's highest office.

Ram Nath Kovind: a crusader for the rights of weaker sections

"We want to congratulate the president-elect Ramnath Kovind on his victory," State Department spokesperson Heather Nauert told reporters at a news conference Thursday.

Noting that the US and India have a "deep and growing strategic partnership", she said: "We look forward to working with the president-elect on regional and global issues."

Nauert credited the close people-to-people contact between the world's two largest democracies with the type of partnership they share.

"That partnership is obviously underpinned by our very close people-to-people contact with the Indian government and our shared democratic values," Nauert said in response to a question.

Kovind garnered 65.65 percent of the votes in the electoral college against the BJP's projected 70 percent vote for him.