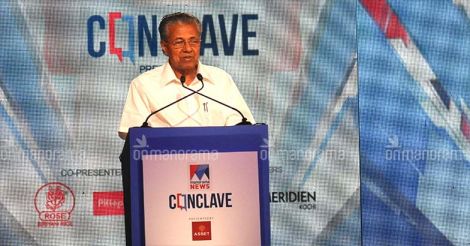 Happiness was a state of being and Kerala would rank among the top places where people were reluctant to see the unhappiness of others, Kerala chief minister Pinarayi Vijayan said Saturday.

He was inaugurating Manorama News Conclave in Kochi.

Delving into the historical and social context of happiness, Pinarayi said happiness was earlier the privilege of the affluent. Now, it has become a basic right.

"This is the result of multiple modes of awareness creation. The government is duty-bound to provide maximum happiness to all and the mission-mode activities are aimed at this," he said.

Urging media houses to weigh how much positive news was being dished out, he said the conclave should be an opportunity for Kerala to introspect how happy we were.

Interacting with Manorama News director Johny Lukose at theconclave, Pinarayi said the government was not against constructive criticism with regard to the Vizhinjam project in particular and other development works in general.

To a tricky question on whether he was aware of an intimidating image that he had, the CM said many of these were attributed to him by society and the media.

Listing out the priority projects of the government, he said the LNG Pipeline, Vizhinjam port, roads and wider highways were top on agenda.

"We need the tag of a corruption-free state and not that of low-corruption state," he said on the grassroots-level changes that his government was trying to bring about.

The session was characterized by the chief minister's quick repartee. Here are some of the questions and answers which got the CM an ovation.

Q: How does the CM find happiness

A: Work hard, finish your job in hand.

Q: The most happy moments as CM

A: The support of people in the face of criticism

Q: How do you manage workload and stress. Don't you feel like watching a movie or listening to a song?

A: If I think that such a deviation will prevent me from doing more important work at hand, I am unhappy. So, I seek happiness by working.