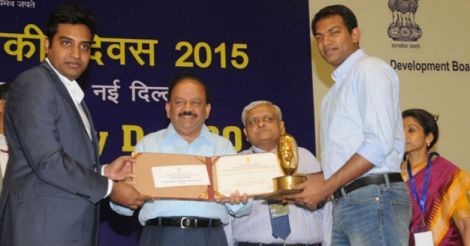 A sum of Rs. 3 lakh and a trophy were awarded to the Startup Village Chairman Sanjay Vijayakumar and CEO Pranav Kumar by Union Minister of Science and Technology Dr Harsh Vardhan at a function in New Delhi.

Established in April 2012, Startup Village is the country’s first Public-Private-Partnership model Technology Business Incubator. It is directly promoted by the Government of India’s Department of Science and Technology (DST), along with Technopark in Thiruvananthapuram and Kochi-based MobME Wireless Solutions—a 2006-founded company focused on mobile internet services for mobile-phone users.

Sanjay Vijayakumar said, "The award would boost Startup Village’s plan to launch a billion-dollar campus startup in India by 2022, when the incubator would complete its first decade and the country would be celebrating the 75th year of Independence."

Startup Village, which has the Government of Kerala providing the infrastructure, marked a paradigm shift in PPP. “Instead, we focus mobile-internet innovations by primarily incubating student startups,” he added.

The forum is also planning to expand as an electronics incubator.