At least 74.02 per cent of the total 2.74 crore voters exercised their franchise for the Kerala Assembly election according to preliminary assessment when polling drew to a close at 7pm in the state on Tuesday. The final figures have not been released yet.

The turnout might crawl up to 77 per cent once the final tally is ready.

The ECI said 73.69 per cent of male voters, 73.48 per cent of female voters and 37.37 per cent of transgender voters exercised their franchise as per the preliminary assessment.

The polling percentage is high in Kannur, Kozhikode, Palakkad and Thrissur districts. Polling is also high in Nemom, Kazhakoottam and Vattiyoorkavu constituencies in Kerala. Voting was peaceful except in some places. Four people collapsed and died while waiting to vote.

The constituencies in north Kerala and Thiruvananthapuram district witnessed brisk polling on Tuesday. Over 38 per cent votes were cast in the first five hours of polling for the single phase election to the Kerala assembly.

Polling began at 7am in the 140 constituencies in Kerala where its 2.74 crore voters would elect representatives for the 15th Legislative Assembly. As many as 957 candidates are in the poll arena.

The election was held with strict adherence to COVID-19 protocol across the 40,771 polling stations in the state. The polling concluded at 7pm, except in nine constituencies under risk of Maoist threat. Polling ended an hour early at 6pm in these constituencies.

COVID-19 patients and those in quarantine cast their votes during the final hour of polling. They wore Personal Protection Equipment (PPE) while voting.

UDF candidate in Kochi, Tony Chammany, who had been in quarantine since he was tested positive, also cast his vote wearing PPE kit.

Two voters, including a woman, standing in the queue in Aranmula in Pathanamthitta and Chavittuavary in Kottayam collapsed and died.

Gangadharan (75), a native of Njarakkulangara, died while waiting at a polling booth in AJB School in Palappuram near Ottapalam in Palakkad district. He collapsed inside the polling booth while officials were checking his voter ID. Another one was died in Haripad.

Tempers ran high at Kattayikonam in Kazhakootam constituency, a stronghold of the Marxist party in Thiruvananthapuram district, as CPI(M) and BJP workers clashed. Four BJP workers were injured and their car was damaged.

Devaswom Minister Kadakampally Surendran, who is the LDF candidate from the constituency, told reporters that the aim of the protestors was to disrupt the voting procedure and alleged that police had acted as "BJP agent".

Three Marxist workers, including the minister's personal staff, have been taken into custody.

He said the BJP workers had reached Kattayikonam in two cars and allegedly attacked CPI(M) workers including a ward councillor and that he would file a complaint before the Election Commission and the DGP.

Sobha Surendran, the BJP candidate from Kazhakootam constituency, had earlier in the day held a sit-in protest in front of a polling booth in the area.

Minor clashes between CPM and Congress workers were also reported in Chuttipara (Aranmula in Pathanamthitta district) and Anthoor in Taliparamba in Kannur district.

Central forces were deployed in 549 critical location booths and 433 vulnerable polling booths in the state.

On the allegations of bogus voting raised by some political parties,the CEO said the commission has not received any such reports as of now. But some people might have tried and their numbers may be "very very negligible", he said.

He also thanked the people of Kerala and all officials who cooperated with the commission, especially the web casting team, headed by additional CEO, Sanjay Kaul.

A polling officer at Thalavady in Kuttanad's Alappuzha district failed to turn up for poll duty on Monday evening following which another official had to be deployed, Election Commission sources said.

Police said they had received a man missing case and on investigation it was found that the official was at his residence itself and had reportedly 'overslept'.

Chief Minister Pinarayi Vijayan, seeking re-election from Dharmadom in Kannur, expressed confidence that the LDF would be voted back to power and register a 'historic' win.

The BJP account in Nemom, the solitary seat won by the saffron party in the 2016 polls, will be 'closed', he said.

On the polling day also, sparks flew over the Sabarimala issue with the LDF and UDF locking horns.

Vijayan said the devotees of Lord Ayyappa and all other gods will be with the LDF, while Congress leader, Ramesh Chennithala, opined that bhaktas will not forgive the Left Front, which will face Ayyappa's wrath.

Kerala had witnessed violent protests by activists of BJP and right wing outfits after the LDF government decided to implement the 2018 Supreme court verdict allowing women of all age groups to offer prayers at the hill shrine of Lord Ayyappa at Sabarimala, where traditionally women in the menstrual age group of 10-50 are banned from worshipping.

Besides Vijayan, 11 of his cabinet colleagues are among the 957 candidates in the poll arena. 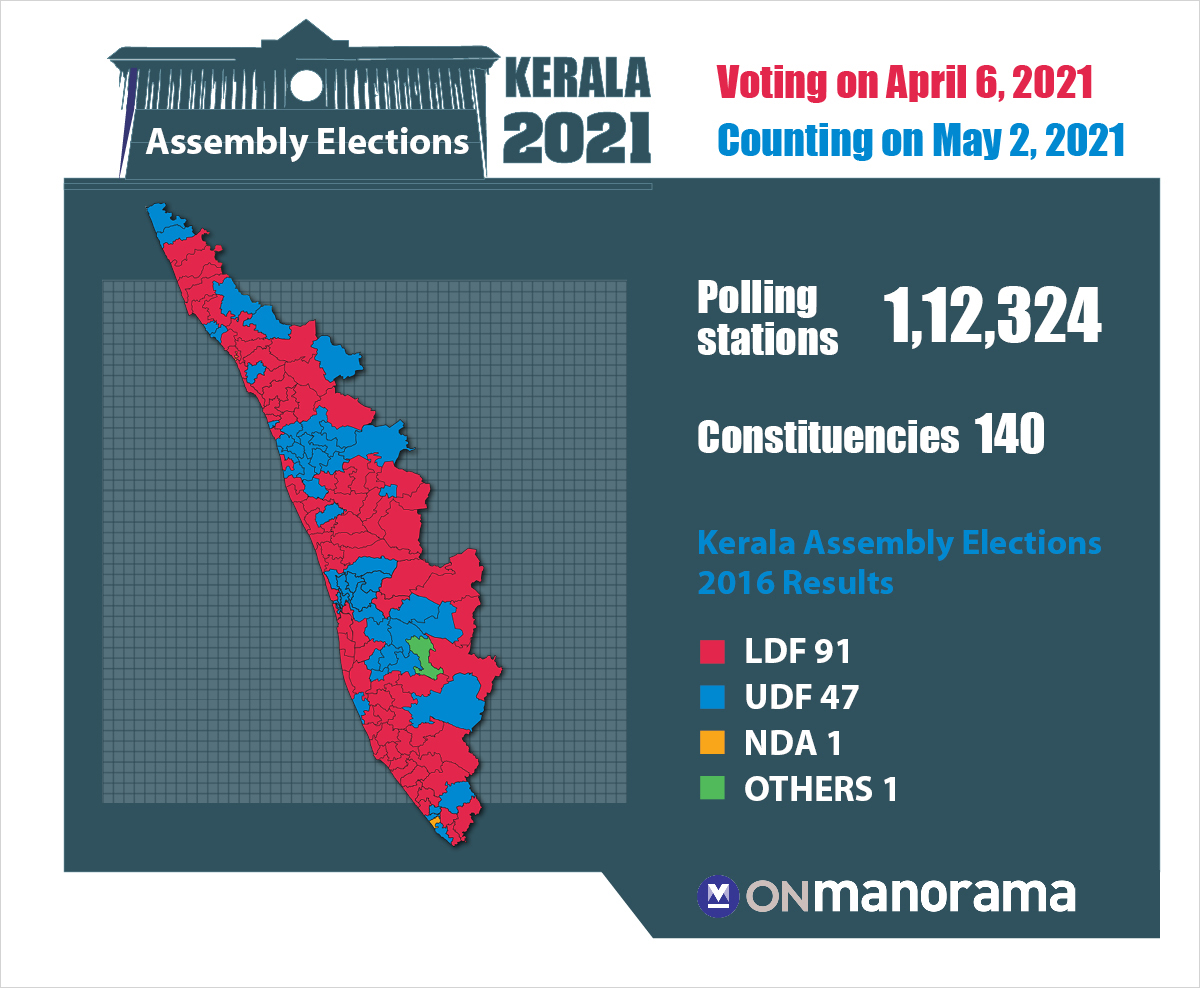 The LDF comprises 14 parties, including the Kerala Congress-Mani and the erstwhile Janata Dal-U (now the Loktantrik Janata Dal), which crossed over from the UDF last year.

In the UDF, there are just five parties at present while the BJP-led National Democratic Alliance also has five.

The total number of ballot units used for the general elections, including reserve, is 50,496, control units used were 50,376 and 54,349 VVPAT machines were used.

Barring few minor incidents, polling was by and large hugely peaceful in the State with no complaints about the poll process, the election commission said.