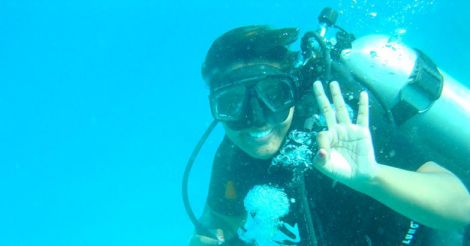 It was my first ever scuba diving session. Having watched many videos on television and on the internet, I was keen on giving it a shot. I must say, it was a very exciting and thrilling adventure.

The 'cool' divers at Kovalam

I was raring to go as I took a train to Thiruvananthapuram, Kerala's capital city. A short ride took me to Kovalam, one of those beaches that put the state on the international tourist destination. Situated approximately 800 yards from the famous Kovalam beach, is the centre that strives to show you a world beyond the obvious. For me, the adventure had only begun. I was soon interacting with Cool Divers' favourite professionals. As I had begun to adjust the settings on my camera, I was greeted by one of the senior divers and a rather bubbly girl, Madhumathy hailing from Chennai.

Also read: Why Bait is that perfect place for a quiet meal

Do not be fooled by the way she 'cracks-up' every now and then. Madhumathy is a very special person. This young lady, who is 20 years old, has made her mark in an area which many considered to be a male bastion.

When you are passionate about the profession

Madhumathy had always loved water. After a short stint as a student of Biotechnology, Madhu (as she is known by friends and family), decided to venture into the world of marine archaeology. For which, she would need to be a good diver. In 2013, at the age of 18, she had enrolled herself for a certification course in scuba diving at Temple Adventures, Puducherry.

“The first time I went for a dive in 2011, I was really scared. Post the dive, I remember asking my instructor - sir, why was the water so salty?,” Madhumathy chirped.

Well, a lot has changed for her since that day. Today, she is one of the youngest female diving instructors in India. In 2014, she had become an Emergency First Responder (which is similar to first aid care) and a Rescue Diver. In 2015, she went on to pursue her diving masters course at New Zealand.

Kovalam: On a quest for serenity, peace, adventure

Madhumathy later had taken up a job as a dive master in 2015 at the Cook Islands. After a period of three months she had returned to India as an accomplished Open Water Scuba Instructor and Specialty Instructor (a diver gets to specialise in one out of the 25 diving courses offered by PADI – Professional Association of Diving Instructors). At present, Madhumathy is doing her bachelor's in English Literature as correspondence with the Madras University.

Her journey to becoming a professional diver also saw its own ups and downs. She explained, “Diving is a male dominant field. Few women consider it. I was one of the youngest trainees at my training centre. A male diver is often given more regard than a female diver. But I knew that I had to whatever it took to be the best. So I began learning more and stood up for myself in every tough situation.” Madhumathy also went on to say that parents are often hesitant to let their daughters consider professional diving. Not only is the training expensive but they are subject to questions concerning the possibilities of a groom for a female diver.

Read: You have to visit these beaches on your Kerala trip

When asked as to what diving meant to her, she said, “It is a way of life. I have to be in the water. As an instructor, I am confident about my skills. I know what I have to do. I am confident that I can keep a person calm under water by merely tapping my hand twice on his or her shoulder.”

She also explained the many scopes of being a diver. From research to making it a hobby, Madhu said that divers have many options to choose from. Madhu is quite grateful to her family for their support throughout her career. But was it a 'safe' decision to make? “Diving is safer than riding a bike around the city,” she explains. “But, she says, the mantra is that you must never dive alone."

On the work front, Rashami is all set to enter the digital world, and says her upcoming web project will...