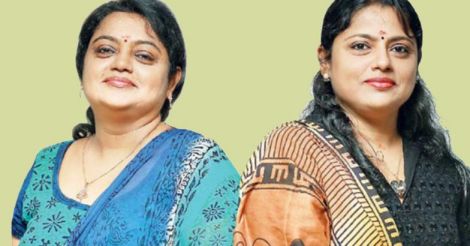 There is no better investment than an understanding partner. What if your business partner is someone who knows your every strong and weak points?

Asha and Bindhu from Thiruvananthapuram present a harmonious combination in their painting sales.

They are the perfect example for understanding and supporting sisters. Onmanorama Women presents you the lives and works of four pairs of sisters- fourth part of the series.

The older sister was enamored by the mural painting tradition of Kerala. The younger one was into Egyptian paintings. When the two of them got together, they made a successful art business.

“Our mother Sarojini was a pious woman. I used to accompany her to the Sree Padmanabha Swamy Temple every Thursday. I was drawn to the murals in the temple. I used to make someone tell the legends behind them to me. I wondered about the natural colors that went into them. I learned mural painting,” said Asha.

When Tenaz and Fidan gave footwear business a fashionable twist

Bindu said her introduction to art was through an entirely different route. “The twist in my life came through the social studies in school. I was curious when the teacher told us about the Egyptian civilization. I could visualize everything even though I had little exposure to it. I continued pursuing my interest more easily after the advent of the internet.”

Egyptian paintings need glossy paints. “You also need glittering paints to bring alive the many ornaments. As I ventured more and more into those paintings, I realized that many of the figures in the paintings were actually their letters,” she said.

Asha and Bindu work in tandem. Whenever one of them painted, the other artist would watch over her shoulder. They would make it a point to incorporate the other’s suggestions before they gave the final touches.

They said their partnership started with the Christmas cards they drew as children. Then both of them went in pursuit of their separate careers, reserving their passions to an occasional work they did for a friend.

Years later, they encouraged each other to quit their jobs and do what they always wanted to. Bindu quit her job with a technology company, while Asha resigned from the Kerala Women’s Commission. They made their passion into their livelihood.

They say they are were looking for something more than money when they started their business. Now they earn about Rs 20,000 a month through their paintings. Right now they sell their works only through their contacts. They are planning to sell through galleries and websites.

Asha said her works were mostly on Devi, Krishna and Ganapati. She had presented to the Guruvayur temple her most prized work - that of a Krishna.

The sisters also conduct painting classes in their house on holidays. They have an ambitious plan to introduce Kerala mural and Egyptian paintings to saris.

Read: Women Business News | This $170 million company owner found her dream in a spoon of yogurt