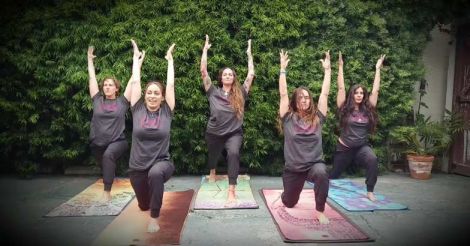 A group of six die-hard woman yoga enthusiasts has started "Strike a Pose DC" movement aimed at raising awareness and celebrate the International Yoga Day at the historic National Mall in the US capital on June 21.

Billed as a "demonstration of peace through Yoga, Mindfulness, Meditation, and Movement", the event is being organised by woman yoga teachers from Orange County in California in a bid to popularise the ancient Indian practice.

"After a year full of protests in the USA, I feel now is the time for yoga, mindfulness and meditation to be practised by every person in our country, big and small, old and young.

"Yoga does this for me and I wish to bring awareness of this ancient practice of bringing breath to movement and share it with others," yoga instructor Sarah Hopkins, one of the key organisers, told PTI.

She said after having attended the Women's March in DC 2017, she recognised the need for inner peace as well as protest in her country.

"Strike a Pose DC is a demonstration of peace through mindfulness, meditation and movement. My hope is that all participants will carry this message of peace off their mats with them and into their community," she said.

Kristin Underwood, who began studying yoga in 2002 and just recently finished her 200-hour yoga teacher training certification, hopes that the movement will encourage others to get out on their mat and give yoga a try and see how it can improve their daily life and happiness.

"I hope for Strike a Pose DC will help spread the message of peace and positivity throughout our nation's capital and beyond while inspiring people of all ages and backgrounds to engage in yoga and mindfulness practices to cultivate peace within themselves and their relationships," said yoga teacher Elissa Dawn Strutton, who has been practising yoga for 15 years and teaching for 12 years.

"Yoga is about finding peace within. When we are each more peaceful in our own being, we can then share that peace with the world," said Kolleen Wallace, who has been practising yoga for four years.

"I hope Strike A Pose DC will help people understand that yoga is about finding peace within using breath. When we are each more peaceful in our own being, we can then share that peace with the world," she said.

Responding to a question, Hopkins said Yoga in the US had become a "work out" rather than a "work in" by many studios in the country.

"Daily, I practice meditation and yoga and I have seen a change within the person I am and my hope is that with events like mine, the message will be heard and our participants will carry the message off their mats and into their communities," she said.

"International Yoga Day was a gift from prime minister Narendra Modi 4 years ago and it is my honour to organise Strike a Pose DC, the weekend of Int'l Yoga Day, in our nation's capital including all people, of all ages, free of charge and each at a different level of knowledge when it comes to the practice of yoga," Hopkins said.

Observing that not many people are aware that International Yoga Day exists, which is another hope of her to educate others and bring awareness to the benefits of yoga.

"It is our desire to give them a taste of the goodness that is yoga, along with mindful dialogue, healing singing bowls, a guided meditation, and the sound of Om," she said.

So far more than 200 people have registered to attend the event at National Mall.

"Other groups hold events in their community to celebrate this special day, but we are the first to bring it to our nation's capital," she said.

In New York City, a group holds a Yoga in Times Square class every hour on June 21 and the UN will be conducting a yoga class on the UN lawn the evening before.

"You see, I love yoga and all that it has done for my mind, body and spirit, it would be selfish of me to not share it with others," Hopkins said.

"Yoga is about finding peace within. When we are each more peaceful in our own being, we can then share that peace with the world," said Kolleen Wallace, who has been practising yoga for four years.

Read: Women Health News | Is there a link between allergies and breastfeeding

Anushka strikes a happy pregnant pose in the pool, shares message of gratitude

Anushka is currently spending time with her husband, cricketer Virat Kohli, in the UAE.