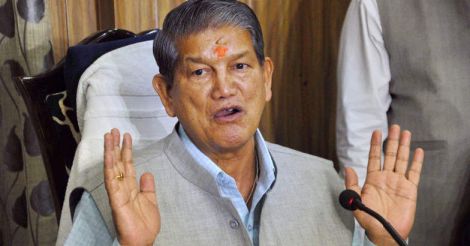 Trivendra Singh Rawat is a religious man, but not superstitious. The new Uttarakhand chief minister ended speculation when he moved into the official residence in Dehradun, which had been shunned by his predecessor Harish Rawat of the Congress.

Though the 40-room bungalow, with a swimming pool and outdoor game facilities, was built only in 2010, it had earned a "bad name" as none of the chief ministerial occupants – B.C. Khanduri, Ramesh Khanduri and Vijay Bahuguna – could sit comfortably in the saddle.

Hence, Harish Rawat, who displaced Bahuguna, decided to take over the state government guest house, leaving the public works department to spend millions a year to maintain the unoccupied official residence. But Harish Rawat too suffered the fate of his three predecessors as he lost the state, as well as both the assembly seats he contested.

The new CM, who heads the BJP national committee on purifying the river Ganga, was firm that his small family would occupy four bed rooms in the official residence, and the rest of the premises would be used for official purposes by the chief minister's team.

A Kerala politician who defied talk of ill omen was Vayalar Ravi. Several of his colleagues in UPA had balked at occupying bungalow no. 7 on Delhi's Safdarjung Road, which had become vacant after the tragic killing of BJP leader Pramod Mahajan, who had built extra provisions to make the bungalow lavish. But Mahajan's killing by his brother and the subsequent death of his private secretary in a drug party had caused trepidation among ministers about the new bungalow.

Nonetheless, Ravi told the urban development officials that he was not scared and took the bungalow to have a long ministerial career. Of course, his simple lifestyle meant many of the facilities added by Mahajan, who lived the fast life, were not put to use.

Trivendra Singh Rawat has ensured that the bungalows built for a specific residential purpose is used for the same as most state governments spend lot of money to maintain the home of the chief executive of the state.

When public works department wanted to close Raj Niwas, the official residence of Delhi's lieutenant governor, for six months for structural repairs, successive governors stayed in alternative bungalows, leaving the building unoccupied for more than a decade. But recently, when retired police officer B.L. Joshi was appointed, he insisted on moving to the Raj Niwas, and now it is again a permanent residence.

The most jinxed chief ministerial residence in the country is perhaps Balabrooie, a bungalow with 14 acres of garden in the heart of Bangalore, built in 1850. It was the residence of the Dewans of princely Mysore state and later housed seven chief ministers of the state, which was later renamed Karnataka. But in 1980, R. Gundu Rao felt the bungalow had vaastu defects and chose to stay in another government bungalow. His successor Ramakrishna Hegde chose to stay in his personal residence, leaving the official bungalow empty. However. S.R. Bommai, a rationalist who succeeded Hegde, moved into the bungalow saying he did not believe that bad luck came through buildings. But his government fell in just six months due to defections in 1988, and after that, no chief minister has dared to stay in Balabrooie, which is now used as a government guest house.

Recently, Telangana chief minister K. Chandrashekara Rao refused to live in any of the government bungalows, and had a massive bungalow built at a cost of Rs 100 crores.

But in majority of the states, chief ministers occupy the designated quarters, though in Tamil Nadu, three of the longest ruling chief ministers – M. Karunanidhi, M.G. Ramachandran and Jayalalithaa – chose to stay in their personal residences, as all three had established strong roots in Chennai through the world of cinema.

But the fear of bad vaastu haunts leaders in case of party offices too. Mayavati, who built a modern building in Delhi's diplomatic area as the national headquarters of Bahujan Samaj Party, refused to shift the party office due to bad vibes. Yet, her party went downhill in successive assembly and Lok Sabha elections, while a couple of caretakers occupy the four-story sandstone building.