On a cloudy and windless morning, the PSLV-C43 lifted off at 9.58 am from the Satish Dhawan Space Centre (SDSC) in Sriharikota carrying 30 foreign and one Indian satellite on board. The vehicle took off from the First Launch Pad of SDSC.

About 17 minutes into the launch, the PSLV-C43 first injected Indian’s Hyper-Spectral Imaging Satellite (HysIS) into the 645 km sun-synchronous polar orbit.

After two restarts of the fourth stage engine of the rocket, the 30 satellites were placed at the designated sun synchronous polar orbit. The first foreign satellite was injected about 1 hour 47 minutes into the launch and the last one about 1 hour and 49 minutes after the lift-off. All the satellites weighed around 262 kg.

ISRO officials said that after separation, the two solar arrays of HysIS were deployed automatically and the ISRO Telemetry Tracking and Command Network at Bengaluru took control of the satellite.

“We will start receiving the data after the satellite is brought to its final operational configuration in the coming days,” an official said.

It was for the first time ISRO launched satellites from Australia, Malaysia, Spain and Columbia. It was the 44th flight of PSLV and 13th one in the 'Core Alone' mode, without the solid strap-on motors. 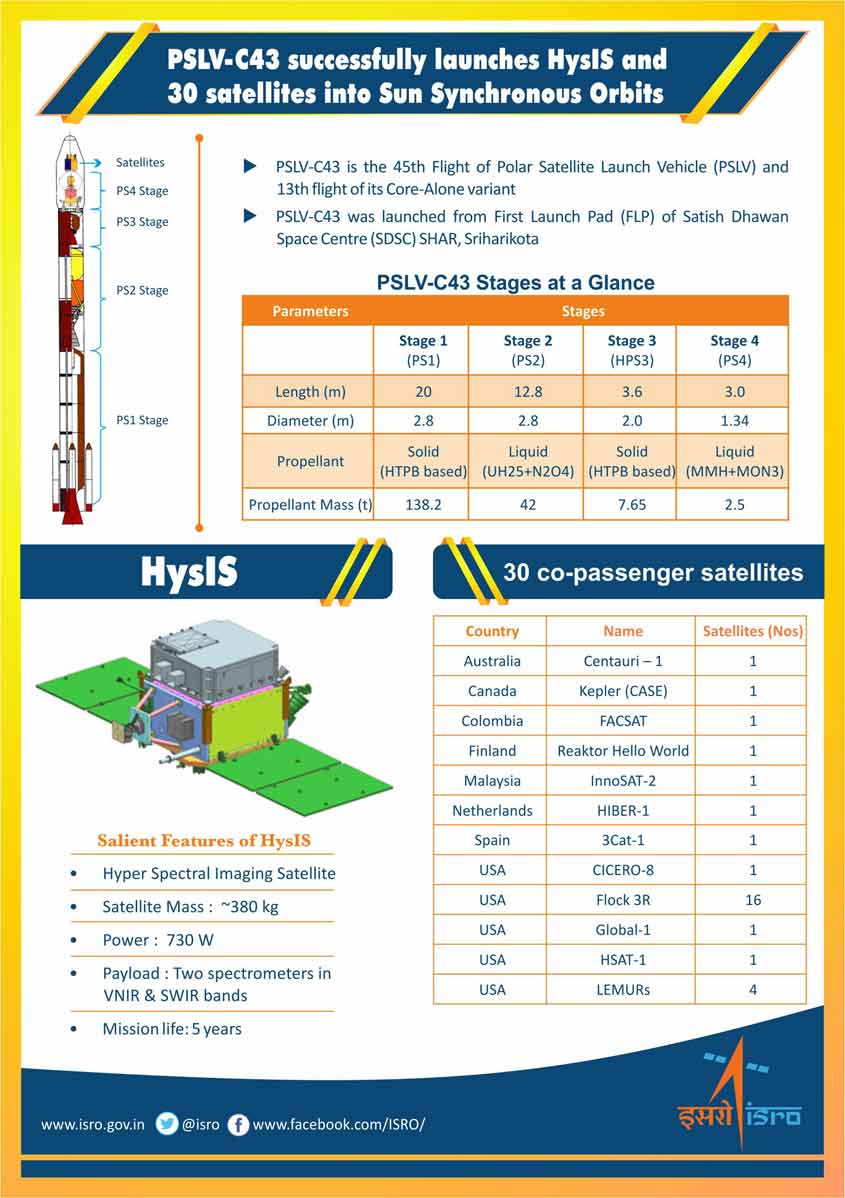 In his televised address to the nation soon after the completion of the launch at SDSC, ISRO Chairman Dr K Sivan said his team has achieved spectacular mission 15 days after the successful GSLV-MkIII\GSAT-29 launch.

“Today once again we have shown our excellence. After placing Indian satellite HysIS at the 636 km orbit in about 17 minutes and later completing two manoeuvres the PSLV placed 30 foreign satellites in their designated homes,” Dr Sivan said.

The state-of-the-art HysIS has many indigenous components developed by ISRO centres -- SAC, Ahmedabad and SCL, Chandigarh.

“It is an excellent space asset to India. Our customers are very happy that their satellites are precisely delivered into orbit. We are gearing up for the next launch of GSAT-11 on December 5 from French Guiana and later GSLV-MkII will launch GSAT-7A from Sriharikota in December,” Dr Sivan said.

R Umamaheswaran, Scientific Secretary, ISRO told Onmanorama that the inspiring work philosophies are the guiding light for the entire team.

“This is again a team effort and there are many who have toiled at our centres across India ensuring success of this mission,” Umamaheswaran said.

Mission Director R Hutton termed the mission as a grand and marvellous one with clockwork precision.

“We have used a lighter version of PSLV today. It has proven capabilities to launch multiple satellites into different orbits. All our team members, their family members and industry partners have played vital role,” Hutton said.

HysIS Project Director Suresh K said that the satellite is performing normally after the launch.

The 30 international customer satellites launched are part of the commercial arrangements with Antrix Corporation Limited.

It was the 45th flight of PSLV and 13th one in the Core Alone configuration, the lightest operational variant.

So far, the PSLV has launched 44 Indian and nine satellites built by students from Indian universities. The vehicle has also launched 269 international customer satellites.