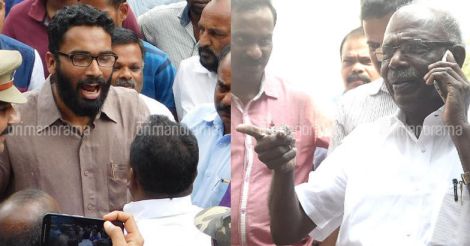 Kunchithanni, Idukki: Kerala electricity minister M.M. Mani, who is known for making controversial statements, said on Saturday that Devikulam subcollector Sriram Venkitaraman needs to be sent to a mental asylum.

Raising serious allegations, Mani said that Sriram has been a henchman of the RSS.

"The subcollector demolished the cross at Pappathichola as directed by the RSS. It was similar to the demolition of the Babri masjid," Mani said.

Read: What is Spirit in Jesus? Why is it hooked to Pappathichola hill?

The subcollector 'Bro' who wages a war against Munnar's land mafia

"The subcollector is anti-people and works as per his own whims and fancies," Mani told at a CPM meet here.

Claiming that no believer has encroached on government land in Munnar, Mani said all the religious signs in Idukki are located in plots without title deed.

Mani and other CPM leaders share a bitter relationship with Sriram who has been heading the anti-encroachment drive in Idukki. Sriram touched a raw nerve of the CPM leaders after a team of revenue officials' demolished a huge cross at Pappathimala which was erected by a Christian sect on an encroached land recently.