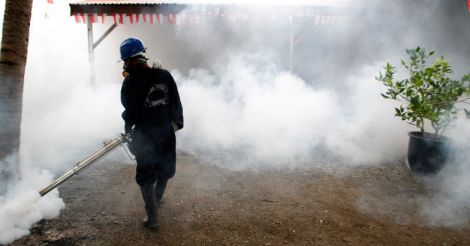 A person sprays fog to prevent the spreading of the mosquitoes carrying dengue. Representational image

Thiruvananthapuram: With the fever death toll in Kerala crossing 200, leader of the opposition Ramesh Chennithala on Tuesday termed health minister K.K. Shylaja "an abject failure" and demanded her resignation.

"We are not going to make this epidemic-like situation in Kerala into a political issue where lakhs are down with fever and the death toll has crossed 200 in the past few months. While the neighboring states have all effectively contained the spread of fever, in Kerala it has been a callous attempt to tackle the fever outbreak," Chennithala told reporters here.

"I will ask the union health minister J.P. Nadda to send a high-level expert team to Kerala to ascertain the real cause of death as a few new diseases seem to have been reported here," he added.

He alleged that "precious time was lost to commence the sanitation drive" and that funds meant to be given to various local bodies were "diverted to a different program". He alleged that a CPM feeder organization was given Rs 2 crore.

Chennithala pointed out that culture minister A.K. Balan and education minister C. Raveendranath are convalescing at the hospitals with fever.

He said the figures released by the health department do not reveal the true picture of the raging fever as these figures relate to only those who have sought treatment in state-run hospitals.

The health minister, however, maintained that incidents of fever have come down.

Meanwhile, chief minister Pinarayi Vijayan on Tuesday engaged in a cleanliness drive in his home district Kannur, while CPM state secretary Kodiyeri Balakrishnan was out on the streets in the state capital along with senior party leaders and cleaned up the General Hospital, where thousands are seeking treatment for fever.

Besides dengue and typhoid, leptospirosis and H1N1 are also being reported in the state.