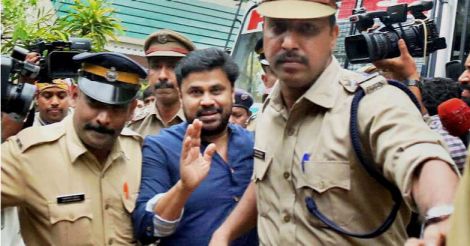 Actor Dileep being escorted in a police van. Photo: Manorama

The HC while rejecting the actor's bail plea said that there was prima facie evidence of Dileep's involvement in the case. It also observed that the accused was a prominent actor and could influence the witnesses if let out on bail.

"This is a rare case. And the investigation is at a crucial juncture," the court said in its 10-page judgment copy.

Dileep, who has served almost 10 days in jail had approached the court last week for bail, but it had reserved the verdict.

During Thursday's hearing, the prosecution reiterated that Dileep was the main conspirator. "This the first such case in the country where a quotation was assigned to sexually assault a woman.The police are yet to locate the mobile phone used to videotape the harassment.

"The probe is not over yet. More culprits could be involved. In such a situation, the actor should not be given bail,” the prosecution contended.

Noted lawyer Ramkumar said that that if two people were to meet, it cannot be termed as a conspiracy.

"Dileep has been arrested based on the statement of main accused Pulsar Sunui, who is seasonal offender and an accused in numerous cases. This cannot be justified. A high-level conspiracy has been hatched to trap Dileep in the case.

"If Dileep were to be lodged in jail for longer duration it would affect the many number of film projects."

The actor, arrested on July 10, moved the high court for bail after an Angamaly magisterial court refused to grant him the relief and sent him to judicial custody till July 25. Dileep had approached the court last week but it had reserved the verdict.

Dileep, charged under various sections of the IPC, including the one for hatching criminal conspiracy for the February 17 attack, is currently lodged in a jail in his hometown Aluva.

The police have claimed that the conspiracy to abduct and assault the actress and film the dastardly act was hatched by Dileep and Pulsar Suni.

In their remand application, the police had claimed that Dileep had developed a grudge against the actress for letting his then wife know about his alleged affairs and had hatched a conspiracy to take revenge way back in 2013.

The actress, who has also worked in Tamil and Telugu films, was abducted and allegedly molested inside her car for two hours by the accused, who had forced their way into the vehicle and later escaped.

The court will also consider the anticipatory bail plea of Dileep's manager, Sunil Raj (Appunni), who has been absconding since the actor's arrest.

Tips to keep your home safe while facing twin scourges of flood, COVID

As Onam, the harvest festival of the state is round the corner, many are planning housewarming of their brand new homes.