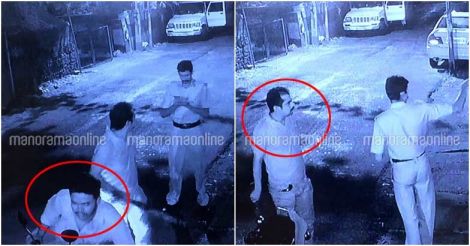 Thiruvananthapuram: Two police personnel, who reportedly did not try to intervene as miscreants vandalized a BJP state committee office in the district, have been suspended.

“Though five personnel were at the spot including the Museum ASI, only one tried to stop the miscreants,” the BJP leaders alleged.

According to CCTV visuals released by the state BJP headquarters, a few people arrived at the party's office around 1.40 am Friday. They smashed the window panes of at least six vehicles parked inside the compound, including the one that belonged to party's state chief Kummanam Rajasekharan.

Why a siege of political violence is engulfing TVPM?

"This is a planned attack and it was unleashed by the CPM after coming to know that our state president was staying overnight at the office," party general secretary M.T. Ramesh told the media.

However, the CPM's contention is that the trouble started after RSS-BJP activists unleashed attacks on its party activists and their residences in the state capital. The party alleged it was a political move to divert attention from the bribery allegations raised against the BJP leaders in the medical college affiliation scam.

(With inputs from IANS)