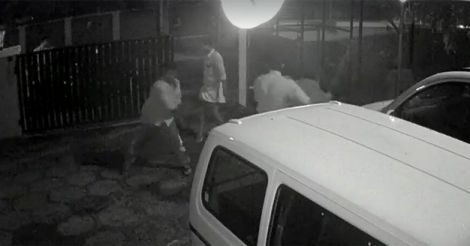 Thiruvananthapuram: The police have taken into custody four people, including CPM councilor I.P. Binu, for attacking the BJP state committee office in the wee hours of Friday. SFI leader Prathin Saj Krishna was also among the detained.

Hours after a group of people vandalized the BJP office and smashed the window panes of cars parked outside the building, the CPM suspended Binu and two others from the party.

BJP Kerala president Kummanam Rajasekharan was in the building during the incident, party sources said. The BJP alleged that CPM's Kunnukuzhy ward councilor I.P Binu led the attacks on its state committee office. The BJP also posted a CCTV visual that purportedly showed the attack on its office.

BJP leader M.T. Ramesh alleged that the attack was an attempt on Kummanam's life. “This was the second such attempt aiming at Kummanam,” he said, adding that there was a conspiracy involving CPM top brass behind the attack.

Meanwhile, the CPM state secretary Kodiyeri Balakrishnan said that the RSS was consciously trying to disrupt the law and order situation in the state.

"Attacking a party office is not the CPM's style of functioning. All parties have a right to function in the sate," Kodiyeri said, even while issuing a strong warning to party workers.

"The BJP is trying to provoke the CPM activists and create unrest in the state. CPM workers should exercise self-restraint and not be drawn into such provocations,” he said.

The CPM's contention is that the trouble started after RSS-BJP activists unleashed attacks on its party activists and their residences in the state capital. The party alleged it was a political move to divert attention from the bribery allegations raised against BJP leaders in the medical college affiliation scam.