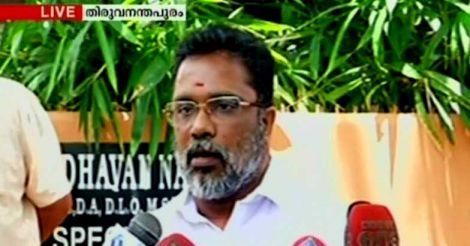 Thiruvananthapuram: Estranged BJP leader and former convener of the party's Cooperative Cell, R.S. Vinod, testified before the State Vigilance and Anti-corruption Bureau (VACB) that he had accepted Rs 25 lakh from a medical college owner promising him to arrange affiliation from the Medical Council of India (MCI). He said this while giving his statement before the vigilance team probing the cash-for-medical college-affiliation scam allegedly involving state BJP leaders.

Vinod also told the VACB that he accepted the money as consulting fee and this was handed over to Satheesh Nair, a consultant based in New Delhi. He claimed that he had not availed any personal gain from the deal, adding that no BJP leader had anything to do with the episode.

The VACB questioned Vinod in a complaint that BJP leaders took Rs 5.6 crore from R Shaji, the owner of SR Medical College, Varkala, promising him the affiliation from the MCI. It is alleged that Vinod sent the money through a hawala dealer from Perumbavoor in Ernakulam to New Delhi. He was expelled from the BJP following the allegations. The complaint was filed by Sukarno, CPM leader and former councilor of Thiruvananthapuram Corporation. The case is being investigated by a VACB team headed by SP K. Jayakumar.

Earlier, an internal inquiry commission of the state BJP, comprising K.P. Sreeshan and A.K. Naseer, had stated in its report that Vinod had confessed to accepting money from the medical college owner. "It is true that I accepted the money. And it was handed over to Satheesh Nair, a middleman in Delhi through hawala channels with the help of another person from Perumbavoor," Vinod was quoted as saying in the report. Vinod had also told the commission that his involvement in the deal was part of his consultancy business and the party had nothing to do with it.

Later, when the copy of the internal inquiry report was leaked to the media, Vinod came out in public alleging that there was a conspiracy to tarnish BJP state general secretary M.T. Ramesh by purposefully dragging his name into the controversy.