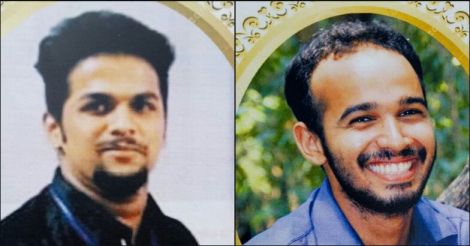 Chalakudy: Rajagiri College of Management in Kochi was all set to celebrate the laurels their students had earned at the Calicut University Management Festival. But on Thursday, a pall of gloom descended the campus as the bodies of two of the winners were brought in.

The two MBA students died in a road accident near Chalakudy while they were returning after winning top prizes at a management festival in Malappuram. Two other students were seriously injured and one of them is in a critical condition.

All four are first year students of the Rajagiri College in Kochi. Their car crashed into a stationary truck near Nadukunnu, Potta, on the National Highway around midnight Wednesday, killing Christy Mathew Philip, 24, and Bimal Sebastian, 21. Both the deceased were from Kottayam.

Injured Blessen T. Varghese, 26, of Chengannur, is in a critical condition at the Rajagiri Hospital in Aluva. The other injured is Josy Mathew of Thrissur.

Their collegemate Vinayak, had a narrow escape as he got off the vehicle about 30 minutes before the accident at Thrissur.

Bimal had won the first prize for the best manager at the all-India festival held as part of the Calicut University's Golden Jubilee celebrations. The Rajagiri team won the overall championships too.

Bimal died on the spot, while Christy was declared dead on arrival at the hospital.

Bimal had been a regular winner at management festivals, winning the best manager prize at about 35 festivals during his B.Com course at the CMS College, Kottayam.

Christy, whom friends recall as a man with a ready smile, had done his engineering in electronics at Amal Jyothi Engineering College in Kanjirappally, and had worked as an engineer for two years before joining for MBA. He and Bimal were intimate friends as well.