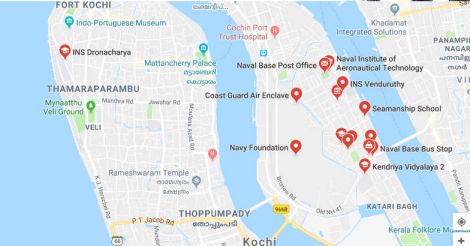 The UAV crashed near a bulk liquid terminaling facility (which stores potentially explosive compounds) at the naval base in Kochi.

Kochi: An unmanned aerial vehicle (UAV) of the Indian Navy crashed near the Southern Naval Command (SNC) in Kochi on Tuesday.

A major flare-up was prevented as the crash site was close to a bulk liquid terminaling facility (which stores potentially explosive compounds) near the base.

The incident occurred at  Tuesday morning, hours before vice-president Venkaiah Naidu was to arrive at the defense base.

The Israeli-made pilotless aircraft crashed during take off from the naval airport for a routine sortie, a defense spokesperson said. The crash occurred due to technical reasons, he said.

"A remotely piloted aircraft 'Searcher' on a routine surveillance mission crashed north of the naval airfield INS Garuda after take off at 10:25 am," a defence release said.

"However, there has been no casualty or damage to property. A board of inquiry as been constituted to investigate the cause of the accident," it said.

The spokesman said the crash has not caused any damage to the runway.