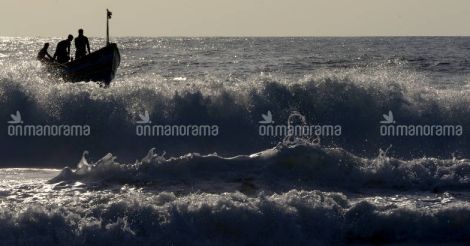 The government officials were specifically told to prevent fishermen from venturing out to the sea as strong winds were expected. Photo: Rinku Raj

Thiruvananthapuram: The Indian Meteorological Department (IMD) on Tuesday reiterated that it had issued several warnings to the Kerala government about Cyclone Ockhi. The Central agency's director at Thiruvananthapuram, S Sudevan, said warnings were given to the State Disaster Management Authority (SMDA) and top officials a day before the cyclone hit the state's coastline. The IMD called the Kerala officials repeatedly during the day and night and also sent text messages, he insisted.

They were specifically told to prevent fishermen from venturing out to the sea as strong winds were expected. Three fax messages were sent to the chief secretary's office on the night of November 29, detailing the direction of the wind.

Sudevan claimed that the IMD has enough evidence to prove that it acted promptly. Any document sought for a probe will be submitted, he said.

Apart from the local center's calls and messages, Kerala had also received messages directly from Delhi.

The official pointed out that Tamil Nadu government responded to the warnings on the night of November 29 itself, and declared a holiday for schools for the next day. He wondered why authorities in Kerala could not realize the gravity of the warnings.

He said the IMD provides weather alerts to different agencies under the state government every day as a routine. The November 29 alert clearly said the intensity of the wind would be high and hence fishermen should not go out to the sea.

The directors of fisheries and ports were alerted by text messages to issue this warning to the fishing community. A staff member of the SMDA was also contacted on the phone on November 29 night and the information was passed on. Sudevan declined to name the person, but sought to know why no one took the messages seriously.

Forty-one notifications were issued to the state government and its agencies, Sudevan said and added that the IMD would come up with a new system to issue warnings to the media.

The cyclone has raised questions over the state's preparedness to deal with major natural calamities. BJP state president Kummanam Rajasekharan said chief minister Pinarayi Vijayan owed a public apology for his failure in handling the aftermath of Cyclone Ockhi.