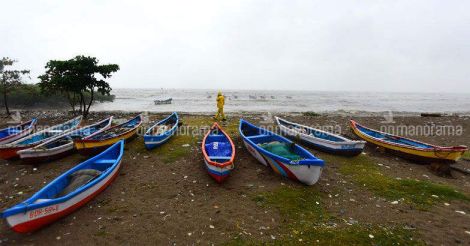 Officials said the number of boats was being restricted to around 100 as several fishermen did not join the effort.

Thiruvananthapuram: Even 20 days after Cyclone Ockhi battered the Kerala coast, the search and rescue operations to trace scores of missing fishermen are yet to gain full steam.

Though a meeting chaired by Kerala chief minister Pinarayi Vijayan had promised that the search will be extended to the Goan coast, the operations are being restricted to Mangaluru till now. To add to that out of the promised 200 boats, only half the number has turned up for the rescue mission.

Officials said the number of boats was being restricted to around 100 as several fishermen did not join the effort. The shortage has also forced the team to restrict the search to Mangaluru, sources said. Earlier decision was to entrust the operation to a team that comprises fishermen and marine enforcement officials. They were to deploy 200 boats from Kochi, Kollam and Alappuzha.

The government had declared it will provide allowance to the fishermen, apart from money to buy diesel for the boats. In the first phase, 105 boats joined the effort on December 17. Officials had said more boats would join on Wednesday, but new teams could not be deployed as fishermen stayed away from the mission. The fisheries department said most of the fishermen were at work and could not join the efforts.

The search is supported by 25 boats each from Neendakara, Kochi and Munambam and 30 from Beypore. Each boat has five fishermen on board. The Neendakara boats are carrying out the search up to Chettuva. Those from Kochi are looking for missing people up to Koyilandi. The Munambam boats go up to Kannur while those from Beypore have been assigned the area up to Mangaluru coast.