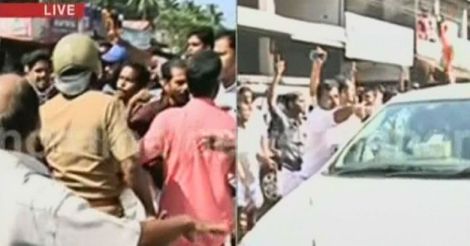 Balram was attending an inaugural event at Koottanad in the district.

Palakkad: The CPM protest against Congress legislator V T Balram, whose remark on the late Communist leader A K Gopalan's marriage triggered a heated row in Kerala, turned violent in Koottanad on Wednesday. The Thrithala MLA, who sustained a minor injury on the forehead, was immediately taken to a hospital in Edappal.

Following the incident, the Congress-led United Democratic Front (UDF) said they will observe a hartal in the assembly constituency on Thursday in protest against the assault.

The police resorted to lathicharge to disperse CPM workers who threw stones at Balram's vehicle. As the CPM protest turned violent, the UDF men gathered to rescue their leader.

Balram was attending an inaugural event at Koottanad in the district.

The Congress leader had courted controversy last week after he made unsavory remarks against the Communist icon, triggering widespread criticism cutting across party lines.

While the ruling CPM urged the Congress to take action against the young MLA, a section of Congress leaders also rubbished his statements, saying it was not the party's culture.

A many time Lok Sabha MP, Gopalan, called AKG by his admirers, was popularly known as 'crusader of the downtrodden.' He had also served as the leader of the opposition in the Lok Sabha.

Balram, in a Facebook post, had made some objectionable remarks about the love affair and marriage of Gopalan with his wife, Susheela, who was much younger to him. He also posted the copy of a newspaper article and some pages of AKG's autobiography to 'justify' his comments.

The remarks triggered a widespread row on social media with a large number of people coming out against the MLA.