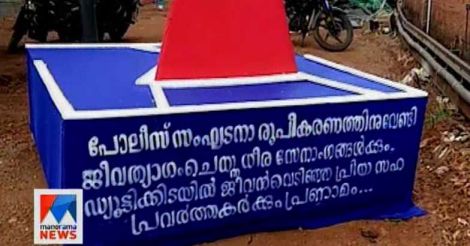 Kozhikode: Close on the heels of an Intelligence report flagging extensive politicisation of the police force in Kerala, the colour of a martyrs' column at the state conference has been changed by cops.

Intelligence chief T K Vinod Kumar, in his recent report to DGP Loknath Behera, had said that excessive political overtones of the district meetings held by the police associations are dangerous and had sought the intervention of the police chief.

“Setting up martyrs' column during the district meetings and raising slogans like 'Inquilab Zindabad' (Long live the Revolution!) are in contravention to service rules," the report had said.

There were also warnings that inviting ruling party leaders who do not hold any official positions for addressing the police personnel could lead to divisions in the force.

However, general secretary P G Anilkumar said the Kerala Police Association has no political leanings and slogans are raised only for the martyrs in the force.

There were no objections to holding commemoration events for martyrs from either the top brass of the police or the government. The association doesn't indulge in any fund raising, other than to collect funds for family members of the cops who have lost their lives in the line of duty, he said.