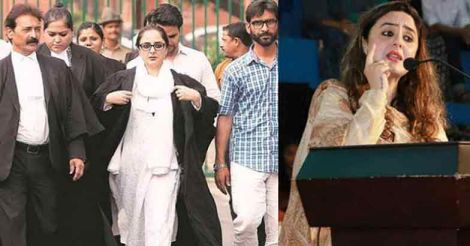 Deepika is the advocate for the murdered 8-year-old girl who was aducted, starved, raped and subsequently brutally murdered by a gang of upper caste men in Kathua region: Manorama

Deepika Singh Rajawat, the lawyer who took up the case of the Kathua victim, has said that she will not be deterred by the threats to her life and the vicious cyber-attacks targeting her and family.

Addressing a function held at Thriprayar, Deepika narrated her experiences after getting involved in the Kathua case. “I will not withdraw from the case under any threat, even at the cost of my life” she said adding an advice to the youth not to shy away from condemning violence.

“I have a daughter who is of the age of the Kathua rape victim and shudder recalling that horrible incident. Maybe that is what compelled me to pursue the case,” said Deepika.

“But I still receive several death threats. In addition are the cyber-attacks against me and my family members. Recently, a campaign was launched in the social media portraying my sister in bad light. However, those who thought that they could rattle me with all this were disappointed,” said Deepika.

According to the lawyer, she was greeted with footwear and stone-throwing in Jammu & Kashmir; but Kerala received her with flowers. “The love displayed by the people of the state have made me so happy. Kerala is indeed a model for the country and gives hope to everyone,” said the advocate who believes she is fighting for justice and truth.

Deepika came to the national limelight after she took up the Kathua case voluntarily. She fought the legal battle with the sole aim of ensuring justice for the victim. Though she faced opposition from the legal fraternity itself, she was steadfast in her resolve to pursue the case.

After the president of the J&K bar association Bhupinder Singh himself came out with a threat against Deepika, the issue attracted widespread attention. The bar association president had warned her to drop the case and if she refused to do, threatened her with consequences.

Deepika subsequently filed a complaint against Bhupinder Singh before the J&K high court and the chief justice of the Supreme Court and sought protection.

Deepika arrived in Kerala to inaugurate a function organized by Thalikulam block panchayat’s Kazhimbrum division to present the Salute Success- 2018 award. She handed over the Youth Icon award to V T Balram MLA at the event.

An 8-year-old girl was abducted, starved, raped, confined in a temple and killed in January 2017 by a gang of men with a motive of driving away a nomadic community from the Kathua region.

The incident kicked up a strom months later when the investigators found out the real motive behind the murder and the gruesome trail of events was unearthed.