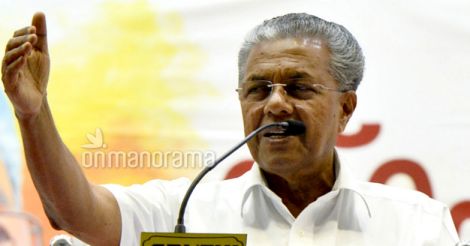 Kochi: A day after he was advised by Madhya Pradesh police not to attend an event in Bhopal in view of Sangh Parivar protest, Kerala chief minister Pinarayi Vijayan Sunday hit out at the BJP-ruled state saying police did not take action against the protesters as it was organized by RSS.

Pinarayi, who is a senior member of the CPM politburo, said the experience he underwent in Bhopal is a reflection of the culture of the Sangh Parivar and the government supported by them.

"If there were protesters, the police should have dealt with that, instead of stopping me," the CM added.

"What's the point in apologizing now," the CM asked reporters on his arrival in Kochi. "A similar incident would not have happened in Kerala," the CM pointed out.

"While there were reports of  violence in north Kerala, union home minister Rajnath Singh had visited the so-called party villages in the region. Even though a tensed situation prevailed in the region, the minister was able to hold his visits peacefully," Pinarayi explained.

CPM had alleged the chief minister was supposed to attend a felicitation program organised by Kerala Samaj in Bhopal Saturday but when he was about to leave for attending it, Madhya Pradesh police told him not to go there as RSS and other organizations were protesting against it.

Following the protest, the program was canceled and the Kerala chief minister went back.

Leaders of some Hindu outfits had organized a protest before the Bhopal School of Social Sciences (BSSS) gate, where Pinarayi was supposed to be felicitated Saturday evening. Police later took nearly 20 protesters into custody from the spot.

Bhopal Malayali Community Association program convener O.D. Joseph had said the program took place without the presence of Pinarayi Vijayan, whose scheduled visit to the venue was 'canceled due to security reasons'.

DIG of Bhopal Raman Singh Sikarwar had clarified that in view of the protest by Hindu outfits, police requested the Kerala chief minister to delay his visit to the venue for security reasons.

"We have never said that we won't provide security to him. We were ready to take him to the venue but in order to avoid unpleasant situation, we had just asked him to delay the visit," he had said Saturday.

"However, Pinarayi Vijayan decided not to visit the venue and therefore it was canceled," he had claimed.

CPM in Kerala Sunday described as 'uncivilized' the alleged action of Madhya Pradesh government, its police and RSS in preventing Pinarayi Vijayan from attending the function in Bhopal.

The action of Madhya Pradesh government and police was also violation of federal principles and constitution, state CPM secretariat said in a statement.

The party alleged that the incident happened with the knowledge of chief minister of Madhya Pradesh and BJP's national leadership.

The party politburo also said the incident was a 'telling commentary' on the condition of law and order machinery in BJP-ruled Madhya Pradesh which cannot protect a chief minister of another state in its own capital.

"The politburo strongly condemns the anti-democratic action of the police and state administration ... This incident shows how the state government acts at the diktat of the RSS," the party said.

The police should have arrested and removed the nearly 250 RSS protesters who were in front of the venue and instead of that, they denied permission for a chief minister of state to meet the people of his home state, the party said.

The party also called for organizing demonstrations in the state to protest against the action of RSS and Madhya Pradesh government.

The ruling CPM-led LDF convener Vaikom Viswam condemned the incident and said preventing the freedom of traveling of a state chief minister cannot be allowed.