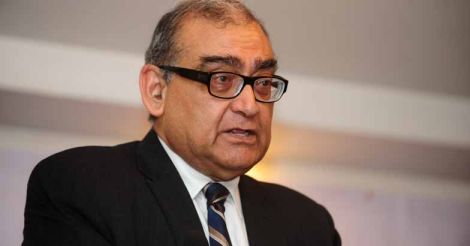 New Delhi: Former Supreme Court judge Markandey Katju has said that he would be 'happy to appear and discuss' the Soumya murder case in the apex court, if there were no legal hurdles.

Katju made the remark on Facebook late on Tuesday after the Supreme Court issued a notice to its former judge for claiming that the top court "grievously erred" in setting aside the death sentence of Govindachamy, who attacked 23-year-old Soumya in a moving train near Shoranur and raped her. She later succumbed to injuries at a hospital.

Notice to Katju on petition against his comments on beef?

Justice Katju in his Facebook post said, "What the Court has overlooked is that Section 300 IPC, which defines murder, has 4 parts, and only the first part requires intention to kill."

He said, "If any of the other 3 parts are established, it will be murder even if there was no intention to kill. It is regrettable that the Court has not read Section 300 carefully."

Saying that the views expressed by Justice Katju, a former judge of the top court, "needs to be treated with greatest of respect and consideration", the court on Monday requested justice Katju to appear in person on November 11 and "participate in the proceedings as to whether the judgment and order dated 15th September, 2016, passed by this Bench a suffers from any fundamental flaw so as to require exercise of the review jurisdiction."

The top court on September 15 set aside the death sentence of Govindachamy, exonerating him of murder charges but said he would undergo life imprisonment for rape.

Govindaswamy had been convicted and sentenced to death by a trial court, and the sentence was confirmed by the Kerala High Court.

Kerala ADGP B Sandhya on Wednesday met justice Katju in the national capital and requested his help in the Soumya murder case. She was accompanied by advocate A. Sureshan.

The investigation team had submitted a report in Kasaragod district sessions court the other day,...