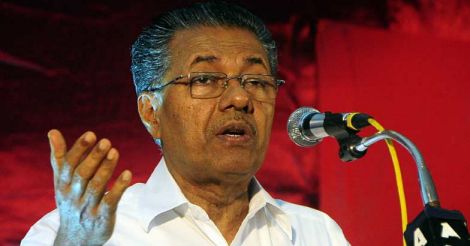 Thiruvananthapuram: Kerala chief minister Pinarayi Vijayan Tuesday downplayed BJP's demand for a probe by an independent agency into the "increasing" political attacks in Kannur district and said the government had taken necessary steps to maintain peace in the area.

"Government has taken all steps to ensure peace. There should be desire on the part of the people concerned to have total peace. But that is not seen there," he said, answering queries in this regard during a cabinet briefing here.

Vijayan suggested that a media team will visit violence-hit areas in Kannur to study the situation on the spot.

"You (media) go there and report what you see," he said.

A five-member delegation of BJP MPs, led by the party's national general secretary and Rajya Sabha MP Bhupendra Yadav, had called on Kerala governor P Sathasivam at Raj Bhavan here on September 18 and apprised him of the situation in Kannur district in north Kerala.

The delegation had alleged that crimes committed by Leftist volunteers against BJP and Sangh workers in Kerala were on the rise.

On September 17, the delegation had visited the residences of BJP workers killed and injured in alleged attacks by CPI(M) activists in Kannur district.

While the Kerala CPM is keen on making the Jose faction an ally, the CPI is against it.