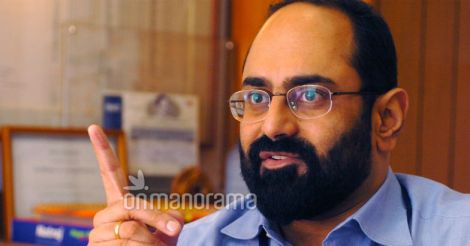 Kottayam: In just nine months of being in power, the CPM-led LDF has proven to be inefficient in its governance and disappointing in performance in all sectors, Rajeev Chandrasekhar, MP, has said.

The NDA's Kerala unit vice-chairman said in a statement that the repeated incidents of political killings after the LDF came to power reminded him of the brutal killings of innocent Indian citizens by Pakistani militants in Jammu and Kashmir.

"It is disturbing to note that the police arrested 2,258 criminals in a week from the state, with Kannur topping the list with 397 (goons). How can this government, which wanted to get 1,850 criminals released from jails ensure safety of its citizens?," he said referring to the controversy over the government's move to commute the sentence of a number of prisoners.

Stating that the law and order situation in the state had collapsed, Chandrasekhar reiterated his party's charges that the government had been trying to shield culprits behind the actress attack case and the death of Jishnu Pranoy, a student of Nehru Engineering College, Thrissur.

The MP said with the price for rice touching Rs 50 a kg and a totally collapsed public distribution system, the common man in Kerala had been suffering the most.

"Perhaps, after the post-world war era of rationing of food grains. The government, in a desperate effort, is now planning to bring rice from West Bengal, through the State Consumer Federation, which is already running at a loss of Rs 447 crore. Paradoxically, these were announced by Kadakampally Surendran, the State Minister for Cooperatives on the same day in the assembly," he said.

Chandrasekhar said the government had not done anything to deliver its promise of 25 lakh jobs in five years. "Not a single major industrial investment came to Kerala in the recent past. Political violence in Kerala is driving away investors from Kerala, hurting its ability to attract investments and create job opportunities," he said.

"It is not enough for the chief minister to occasionally wake up and say we welcome investors," he said.