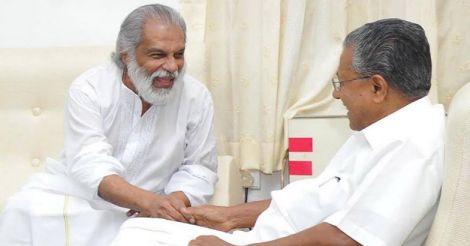 Chief Minister Pinarayi Vijayan today informed the state Assembly that the veteran singer had given his consent to be associated with the project.

"The government will take the initiative to clean all public water sources in the state. Ponds and streamlets will be cleaned in the first phase, while rivers, lakes and other water bodies in the second phase," he said.

"Yesudas has given consent to be the ambassador of the government's Haritha Keralam project," Vijayan said in his reply to a submission raised by Muhammed Muhsin (CPI) on the degradation of the Bharathapuzha, a river which occupies a significant position in the cultural history of the state.

Quoting recent findings of the state Pollution Control Board, he said the presence of coliform bacteria had increased manifold in Bharathapuzha and sewage and waste dumped by hotels located on its banks was the cause for its present pathetic state.

One of the most ambitious initiatives of the LDF government, Haritha Keralam project focuses on a number of issues, including garbage disposal at its source and renovation and cleaning of public water sources.