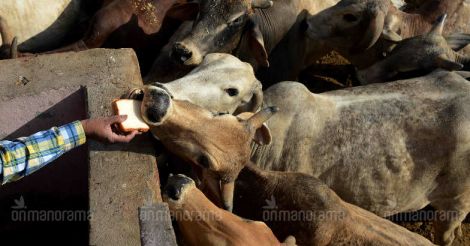 A man feeds a cow at a cattle shelter in New Delhi. File photo

Nagpur: The Vishwa Hindu Parishad (VHP) has decided to issue identity cards to its 'gau rakshaks' in Maharashtra, a functionary of the outfit said Saturday.

The move by the right-wing organization comes in the backdrop of a string of attacks on individuals by cow vigilantes and protests over mob violence in various parts of the country.

"Identity cards will be issued to volunteers involved in cow protection activities and their names will also be submitted to the state government," said Ajay Nildawar, VHP prant-mantri from Vidarbha region in Maharashtra.

He was replying to a question on violence by cow vigilantes at a press conference here.

He added that the step would help distinguish anti-social elements from the genuine volunteers.

Anurag Kashyap's ex-wife Kalki Koechlin: You stood up for my integrity even after our divorce

Kalki felt this is a dangerous time.