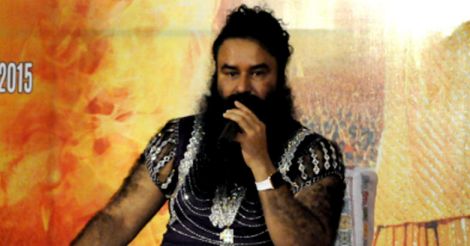 The sentence was passed by the special CBI judge in a makeshift court in the Sunaria jail, where Gurmeet Ram Rahim had been lodged since his conviction on Friday. File photo: Getty Images

• Judge announced 10 years imprisonment for each rape case & Rs15 lakh fine each in 2 cases & Rs 14 lakh each to be paid to both victims: Ram Rahim Singh's lawyer

• Army conducts flag march in Haryana's Sirsa after the sentencing

• Defense argues Ram Rahim Singh is a social worker who has worked for welfare of people, so judge should take a lenient view

• Two cars torched in Sirsa ahead of sentencing

If faith is the pivot, you may lose your girlfriend, a bite of beef and more...

More perplexing than the understated hubris of...

• The Dera chief was convicted by the CBI court in Panchkula on Friday in the 15-year-old rape case.

• After his conviction, his followers went berserk in Panchkula and Sirsa - 38 people lost their lives while over 260 were injured

• The administration made tight security arrangements before the sentencing

The rapist sect chief has been sentenced to 10 years imprisonment in each of the two cases of rape. Both the sentences will run consecutively, the sect chief's counsel S.K. Garg Narwana said after the special CBI judge pronounced the sentence in the District Jail in Sunaria, which was brought under extraordinary security following Friday's violence.

The rape victims will get Rs 14 lakh each as compensation from the fine, CBI special court Judge Jagdeep Singh, who was flown in a helicopter from Chandigarh, said in the judgment.

Earlier, there was confusion over the term of the sentence, with reports that Ram Rahim was sentenced to 10 years in jail. Later, his counsel clarified the position.

Judge Jagdeep Singh had on Friday held the Dera chief guilty of rape and criminal intimidation of the two female disciples in 1999. The complaint in the cases was filed in 2002.

The self-styled godman was in tears and pleaded for mercy as the judge sentenced him to 10 years jail in each of the two counts of rape and criminal intimidation.

The conviction of the Dera chief in the CBI court in Panchkula on Friday had sparked off large-scale violence by his followers which left 38 people dead and 264 others injured.

The hearing to decide the quantum of sentence started at 2.30 p.m. on Monday and the judge gave 10 minutes each to the defense and prosecution sides to make their submission, court sources said.

While Ram Rahim's counsel argued for leniency and minimum punishment saying that he was a social worker and had health issues, the CBI counsel sought maximum punishment given his conduct. The prosecution wanted the case to be treated as "rarest of the rare".

The sect chief's counsel said that the verdict will be challenged in a high court.

There was drama inside the special court as Ram Rahim broke down and pleaded with folded hands before the judge.

After the sentence was announced, he sat down on the floor and wept. He had to be forcibly taken away by jail wardens to his barrack even as his lawyers tried to seek leniency in prison rules for the sect chief who is used to a life of ultra luxury.

Ram Rahim was medically examined by doctors, led by the Rohtak chief medical officer (CMO), and found to be fine.

On Friday, after he was flown to the Rohtak jail, he was lodged in the jail (Prisoner No. 1997).

On Monday, Dera Sacha Sauda followers set two vehicles on fire at Phulkan village near the sect headquarters on the outskirts of Sirsa town, minutes before the sentencing. Security forces rushed to the area to control the situation. Security deployment, including army and para-military forces, continued around the two campuses of the sect near Sirsa.

"We are in control of the situation. We have shown restraint so far. Some dera followers are still present inside the sect headquarters," V. Umashankar, commissioner, told media. Curfew continued in affected areas of Sirsa district.

Anshul Chhatrapati, the son of a journalist, who had first exposed sexual exploitation of female disciples by the sect chief in 2002, on Monday said that their stand against Ram Rahim has been vindicated following his conviction and imprisonment.

Anshul, the son of murdered Sirsa-based journalist Ram Chandra Chhatrapati, welcomed the CBI special court judgment. His father was shot dead, allegedly by sect supporters at the behest of the sect chief, in October 2002 after he wrote about shady activities inside the sect headquarters near Sirsa in his vernacular newspaper "Poora Sach" in 2002.

Punjab chief minister Amarinder Singh appealed to people to accept the court verdict. He said that the Punjab government would continue to maintain constant vigil to ensure that peace is maintained in the state, with curfew to remain in force till needed.