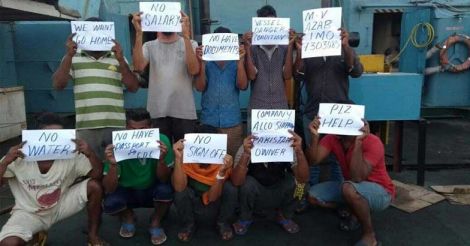 Sharjah: The employees of the ship MV Asab trapped in the deep sea for months are seeking immediate help from the authorities to get to the shore. The distraught crew of 11 members include chief engineer Jijo Joseph from Thodupuzha in Idukki, captain Pradeep Reddy, a native of Andhra Pradesh, two Sri Lankans and a few from Tamil Nadu, Punjab and Haryana.

The ship is under Alco Shipping Services LLC owned by Sayed Isaj Hassan from Pakistan. It supplies fuel to ships anchoring on various ports. The ship, last sailing from the port of Hamriya, has been on the move for the past six months.

Jijo Joseph told Manorama that there were no further directives from the company’s management after he received instructions to move to Malta for a sub-contracting work. On June 2nd this year, officers from the Sharjah Coastal Security force confiscated passports and other documents of all the employees. They would return the documents if the ship’s management contacted the coast guard. The company had assured a quick retrieval of documents. Despite the promises there has been no action for months.

Jijo and his crew cannot approach a port to set an anchor without the passport and other documents. He has been working without salary for the past nine months while Pradeep Reddy has not received his salary for 19 months. The ship has employees with pending salaries ranging from 350 to 2500 dollars. Most have lost their patience and want to just return home, even if they have to forfeit their pending salaries. Jijo had tweeted to India’s external affairs minister Sushma Swaraj explaining the situation but received no response. An official in the minister’s office advised over the phone to contact UAE Embassy. Jijo also sent an e-mail to the Indian Consulate in Dubai. They replied they have begun the efforts to resolve the issue but the procedure is dragging out.

The crew is running out of time as drinking water and medicines are in short supply. Food supply is still on every week. But they fear that the saline water that enters the ship would corrode or harm the ship beyond repair. It is pumped out every day.

In the meantime, the employee from Tamil Nadu was given back his passport and documents to rush home after a medical emergency. But Jijo’s demand to visit his ailing father has been denied.