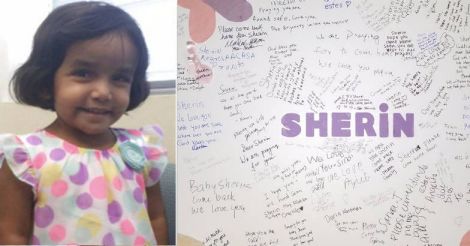 Sherin Mathews vanished on Oct 7 after her adoptive father Wesley Mathews, who is a Keralite, told police he left her outside their home at 3 am as punishment for not drinking her milk.

Houston: Hundreds of people from different walks of life in the US have participated in a prayer vigil for the safe return of a 3-year-old Indian girl who disappeared nearly two weeks ago in Richardson city in Texas.

Sherin Mathews vanished on October 7 after her adoptive father Wesley Mathews, who is a Keralite, told police he left her outside their home at 3 am as punishment for not drinking her milk.

The special needs toddler, according to the reports, was adopted by the Indian-origin couple from an NGO in Bihar's Nalanda last year.

Wesley Mathews, 37, was arrested for suspected child endangerment for the treatment of his daughter Sherin. He was taken into custody after reporting the incident to authorities and has been released on bond, according to police

While police in Richardson city in the US state of Texas are yet to make a breakthrough in the case, the FBI has seized nearly 50 items, including cellphones, laptops, a washer and a dryer from the home of Sherin.

A vigil was held for the safe return of Sherin. A priest placed a sign outside the Mathews' family home calling on the girl's parents to "tell the truth."

Her parents both remain "uncooperative," according to police.

Attendees were holding signs like "stop hiding" and "bring her peace".

Prayers and well wishes for #SherinMathews from tonight's vigil. pic.twitter.com/DmMgTxKZuX

"Come out and tell the truth so everyone can move on and have peace. Our heart and tears goes to this sweet little girl. Wherever you are God keep you with peace...please mom come out and speak up..you will be the one going to be with a broken heart that will never be repaired," said Saly Cherian, a resident attending the vigil.

"My eyes are filled with tears to see the unity of religions and cultures," said Suji Paris Long, who organized the vigil.

"The fact that the mom isn't even helping definitely frustrates me," said Kim McManus, another person attending the vigil.

"The story just doesn't add up. But I am just continuing to hold on to hope," McManus said.

Investigative experts feel it is what the public is not seeing that could be the most important to a resolution in the case.

"There is no question that most of what the FBI and law enforcement are doing, you don't know about," said Alex del Carmen, a Criminologist with the Tarleton State University.

Del Carmen, who guides investigators on what to look for in cases like the one involving Sherin Mathews disappearance, said, "hundreds of people that are working on this case 24/7 trying to piece it all together because there is the presumption that she in fact is alive".

"But looking at past statistics involving older and similar events, 12 days missing is a lot of time, the clock is against the individual coming out of this thing alive," said Carmen. "The odds are against her."

"Investigators are going to look at every single angle," said Carmen. Digital evidence like emails, texts, google searches in any case helps investigators understand if there is any motive.

Reliable sources said that the parents of the girl are involved in another legal battle. Court documents reveal Sherin Mathews' parents will go to trial in February for a crash they were involved in September 2015.